The U.S. Army Corps of Engineers started a controlled refill of Lake Pend Oreille at the beginning of April and is on track to have the lake at summer pool by mid-June. 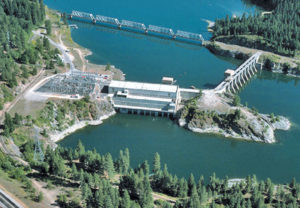 Army Corps representatives visited Priest River Wednesday to share current Albeni Falls Dam operations and provide a preview of what operations could look like later into the spring. Senior Water Manager Logan Osgood-Zimmerman said current data is showing the regional snowpack at 97% of average and the water supply forecast for April to July at 98% of average, so flooding is unlikely.

“The chance of flooding is lower certainly than it’s been the last couple of years,” she said, but added that nothing is set in stone. “There still can be big storms that hit us, and those are hard to predict.”

Due to those average numbers, Osgood-Zimmerman said it’s unlikely the dam will be put on free flow. All signs, including warm weather and slightly higher-than-average precipitation, point to earlier runoff and the lake reaching summer pool — just above 2,062 feet at the Hope gauge — without the wild fluctuations experienced in recent years. Right now, the summer pool target is mid-June.

As of Wednesday afternoon, the lake level sat at just below 2,055 feet. Those with general questions about lake level and associated Albeni Falls Dam operations should call 206-764-6702.

The Army Corps also used Wednesday’s Priest River visit to let the public know that the Columbia River Systems Operations Environmental Impact Statement is now slated for release in February 2020 — a year earlier than originally scheduled. The comment period is expected to last 45 days. For more information about the CRSO, visit www.crso.info. To be added to the project’s mailing list and receive updates, send contact information to [email protected] or leave a message at 800-290-5033.