Meggan Gunter is not afraid to talk about her difficult initial steps into motherhood. After struggling through what she described as the “traumatic” birth of her first child, a baby boy, Gunter found solace in breastfeeding.

“Breastfeeding him helped me reclaim that experience,” she said. “It helped me put a positive spin on the whole thing.”

When Gunter went back to work when her son was only a few months old, she continued to pump her milk throughout the day and breastfeed at home.

“It really felt worth it,” she said. “It was how I stayed connected to him.” 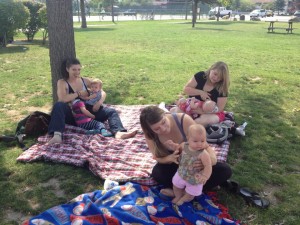 A trio of mothers breastfeeding at Travers Park in 2014. Photo by Angie Shadel.

Now, having breastfed two children while harboring the belief that it strengthened her relationship with both, Gunter is participating in her fifth Big Latch On event—this time as the coordinator. As part of World Breastfeeding Week, nursing women around the world gather on the first Saturday of August and breastfeed their children at 10:30 a.m. local time, in an effort to break the record for most mothers breastfeeding at once. According to the Global Big Latch On website, over 15,000 women attended these gatherings in 2015.

Gunter has become not only an advocate for what a Big Latch On event does to promote breastfeeding conversations amidst the mothers of Sandpoint, but also for what it does for the state of Idaho as a whole. Gunter said that despite Idaho’s high rate of breastfeeding mothers, the Gem State is the only place in the United States without a law protecting a mother’s right to breastfeed in public. Gunter said that despite efforts like the Idaho Breastfeeding Law Coalition, legislators either see no real need for such a law, or want to instate it with a special footnote—mothers are protected while breastfeeding in public, as long as they use a cover.

“Have you ever tried eating your lunch under a blanket?” Gunter said with a laugh, admitting that some mothers prefer to be covered, and that it should be entirely up to them—not the law. “It is hugely frustrating.”

Though Gunter herself has not been discriminated against while feeding her children in public, she has heard about negative experiences from other women. It is these stories, along with others that pertain to motherhood and the issues that surround breastfeeding, which Gunter said make the Big Latch On so important. She also noted that breastfeeding is a learned skill.

“It is really important that women see women breastfeed, and that they can share stories,” she said. “[The Big Latch On] is about fostering that community. It’s about helping people gain confidence.”

Jessica Janssen, an OB nurse and lactation counselor, has been a past participant in Sandpoint’s Big Latch On and said she has found it to be place of encouragement.

“I look at it as a way to normalize breastfeeding,” she said, noting that Sandpoint’s Big Latch On is held in a very family-friendly place: a park. “It’s a great way for moms to network, when otherwise they might not be able to. It’s good to talk to other women in the trenches.”

Gunter said that the event is not only open to nursing mothers but also anyone who wants to come and support. She said that she’d especially love to see a strong turnout of pregnant women who may have questions regarding breastfeeding or motherhood in general.

Sandpoint’s Big Latch on takes place Saturday, Aug. 6, at 10 a.m. beneath the pavilion in Travers Park. Organizers suggest bringing blankets and whatever else will help attendees be comfortable. Beverages will be provided.