Michael and Sarah Williams are no stranger to the restaurant life. Between the two of them, they have decades of experience in the service industry. On April 29, however, the husband-and-wife duo will open the doors to their very own venture—a new restaurant in Sandpoint called Loaf and Ladle.

When Mike’s brother, Joe, saw that the Neighborhood Pub building was up for sale this winter, he shared the information with Mike. Four months later, they are poised to begin what both hope will be a successful business with Mike and Sarah as owner-operators, teaming with Joe and his wife, Laurie, as co-owners. 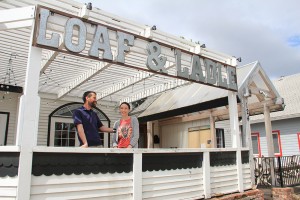 Mike and Sarah Williams sharing a laugh on the deck at Loaf and Ladle. Photo by Ben Olson.

The location, on the corner of Lake St. and Second Ave. is indeed hallowed ground for Sandpoint restaurants. Ivano’s Ristorante began there, as well as the Red Martin, the Blue Moon Café, and later Little Olive and the Neighborhood Pub.

The building features two large patios that are graced by the sun, as well as large, bright dining rooms with picture windows looking out on the residential neighborhood of South Sandpoint.

The fare is dubbed “fresh world bistro” according to Mike: “In summer, we both prefer to eat meals out of our garden. We want to carry that tradition on with quality, accessible food from scratch.”

Mike and Sarah plan to use locally sourced food and ingredients, both to bolster the local economy and to highlight the great ingredients our region has to offer.

“For me, the more money we keep in our community, the better,” said Mike. “We want to try to promote that as much as possible and support those who are making a living here.”

I was lucky enough to get a sneak peak at the new menu, which was designed 100 percent from scratch. Several items jumped right off the page. There is a nice variety of everything from light, healthy fare to savory guilty pleasures.

The main entrees include Jamaican twice-cooked tofu, spaghetti and meatballs, chicken and waffles, cioppino, steak and fries and many more. They will also emphasize daily specials.

“Sarah’s special sourdough bread will also be on the menu,” said Mike, “and let me tell you, it’s really good.”

Also, they will be featuring breakfast and an ala carte brunch every Saturday and Sunday starting at 8 a.m.

Mike and Sarah, who are the parents of Oscar, 7, and Briar, 10, also wanted to point out that they fully intend Loaf and Ladle to be a family-friendly establishment.

“Our kids will be here working, helping us out,” said Mike. “This is a family business.”

Mike and Sarah met at Schweitzer, when Mike was working as the food and beverage manager. Sarah tended bar at Taps and was a supervisor at Bottle Bay Marina.

“We both fully quit our jobs to start this up,” said Sarah. “It was a bittersweet feeling leaving Schweitzer.”

“Schweitzer has been really good to us,” said Mike. “It was a great place to work, and we’ll miss all the people we love a lot. Our kids were born and raised on the mountain.”

In the whirlwind of quitting their jobs, setting up in a new building, designing the menu, planning the operations and being ready for any contingency, Mike said the hardest part is the unknown.

“We don’t know what to expect,” he said. “Where do all the water glasses go? Where will we keep the silverware? Are we ordering enough wine and beer? Will we find a great staff? Once we get our feet under us, it’ll be a lot of fun.”

Check out Loaf and Ladle at 124 South Second Ave. They will be open starting Friday, April 29. Posted hours are Monday through Friday from 11 a.m. to 9 p.m., Saturday and Sunday from 8 a.m. to 9 p.m. with breakfast and brunch.