‘Cold Feet’ set to break a leg at the Heartwood

Oscar Wilde once opined in his 1889 essay “The Decay of Lying” that, “Life imitates art far more than art imitates life.” That notion is about to be tested as Sandpoint-based production company Unknown Locals brings the Chris Herron original play about a wedding day, “Cold Feet,”  to the Heartwood Center on Feb. 12-13 and 19-20.

Herron and his Unknown Locals co-founder, Madeline Elliott, have spent quite a bit of time at the Heartwood over the past few weeks. They were married on the stage of the event and entertainment center a couple of weeks ago. It was a small, intimate weekday ceremony … squeezed in between rehearsals for the play. They tied the knot, so we know cold feet were not an issue for the two. 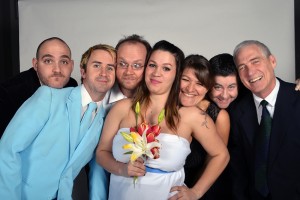 The cast of ‘Cold Feet,’ a play by Chris Herron.

“The funny thing about it,” Herron said, “is I started writing it around 2014. I actually didn’t propose until April 2015. I’d written about this guy who may or may not have cold feet before I had actually proposed. There really wasn’t the concern on my part like there is with the character in the play, but it was fun to have the dove-tailing of planning a wedding and producing a show about a wedding that may have gone awry.”

Director Elliott chimed in: “The situation in the play is a much different circumstance, so even though it takes place at a wedding there weren’t a lot of parallels between our romance and that of the characters.”

Herron’s fifth original play deals with the wedding day of Jack and Molly, both of whom may or may not be feeling the cold feet phenomenon. Family members, friends and even a stranger or two show up at the wedding to celebrate, commiserate and even throw a few left hooks as the couple examine their relationship and future on their wedding day.

The production company has been experiencing an increase in local following with their original plays, which Herron and Elliott have been churning out one a year. “My favorite story about that,” he explained, “is hearing things from people we’ve worked with, like actress and former resident Liz Curry, telling people in her neighborhood about working with this local writer, and having them respond ‘Who is it?’ And when she tells them about the shows I’ve written, they responded with, ‘Oh, we know that guy … he’s the dark comedy guy.’ That’s the coolest thing so far.”

Dark comedy, light-hearted comedy and biting wit are quickly becoming a trademark for Herron’s plays. His real life wedding went off without a hitch on the Heartwood Center stage, and he hopes the play will come off just as well.

The characters in the play? Not so much without a hitch. This wedding day has plenty of opportunities for disaster and carries with it a boat-load of laughs. Next week, we’ll showcase the director, Elliott, and those characters with a cast of locals known and unknown like Dan Simons, Michael Bigley, Tim Martin, Mike Clarke, Eric Bond and newcomers Yarrow Frank and Nicole Buratto.