Unlike many Christmas- themed films, movies with Thanksgiving scenes often portray this holiday with a bit more realism; or, in the absence of realism, pointed comedy that explores the complicated nature of extended family members gathering for the holidays. Below are some Thanksgiving dinner scenes that exemplify this complicated subject matter.

Scent of a Woman 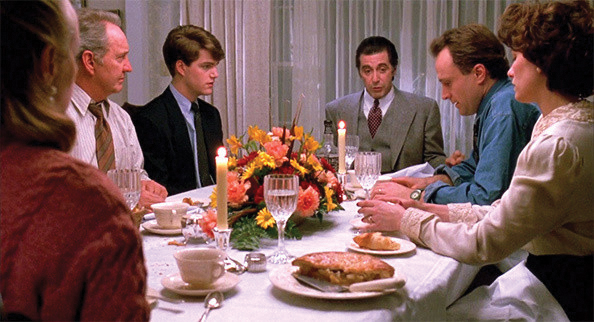 Al Pacino and Chris O’Donnell in ‘Scent of a Woman.’ Courtesy photo.

Al Pacino pulled out all the stops for his performance as Frank Slade, the cantankerous blind retired Army officer in Scent of a Woman. A short scene in the film depicts an uncomfortable Thanksgiving dinner scenario where Pacino’s nephew, played by Bradley Whitford, takes him to task for his past actions in the military, as well as his alienation of the family.

The scene ends with Pacino putting the snotty nephew in a chokehold after sticking up for his prep school handler, played by a young Chris O’Donnell. The tense dinner is uncomfortable to watch, but paints a perfect picture of the rough and tender side of Pacino’s award-winning performance, and shows the realistic awkwardness of some Thanksgiving dinners.

This heartwarming film tells the mostly true story of Baltimore Ravens offensive lineman Michael Oher, whose impoverished upbringing and adoption by a caring family helped him on the way to his professional career. The Blind Side earned Sandra Bullock an Oscar and was also nominated for Best Picture because of its uplifting story.

The Thanksgiving scene is memorable because of the casual air of the family loading their plates and eating around the television to watch a football game. Sandra Bullock’s character notices Michael sitting alone at the dinner table — both overwhelmed by the feast and unwilling to casually sit on the couch eating it. She then snaps off the TV and makes the protesting family sit around the table to interact with one another instead of the boob tube.

It’s a memorable scene because it shows how we often need others to show us what we take for granted. While Bullock’s character and her family show Michael that there is love and support in the world, Michael showed them that this precious time we have together shouldn’t be distracted by a television over Thanksgiving dinner.

Thanksgiving dinners in movies are often filled with groomed family members around the table with awkward comedic lines thrown in, but they don’t often tackle the “misfits’ Thanksgiving” that many of us have experienced in life. Whether we don’t have family with whom to spend the holiday or can’t spend the holiday with them, the gathering of friends around Thanksgiving further shows that we sometimes find our family structure in unexpected places.

At a Thanksgiving dinner scene in Funny People, Adam Sandler’s speech to his fellow comics and “misfits” without family was very realistic. The surrogate family of stand-up comics and jokesters brought fun to the table, but they also acknowledged the importance of propping up each other up in times of togetherness.

The Thanksgiving scene in Little Fockers is not only hilarious but touching, as you see Ben Stiller’s character trying to embrace the tradition and failing (as usual) to impress his father-in-law, played by Robert DeNiro. When a lizard scares DeNiro’s character, Stiller ends up slicing his hand while carving the turkey and the scene devolves from there.

My favorite line from the actor playing Stiller’s son: “Daddy, can I ask you a question… can a girl poop from her vagina?” It’s almost guaranteed the writer who included that line has children.