By Kody Van Dyk
Special to the Reader

The city of Sandpoint draft Parks Master Plan identifies disposing of city-owned green space located east of the Edgewater Best Western Hotel. It appears from media reports and the draft plan that in return the city will receive a piece of property adjacent to BNSF Railway known as the Edgewater RV Park.

I am opposed to this transaction. 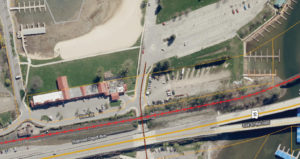 A map of the area in question, with property lines included. The byway is along the bottom of the photo and the lake is to the top. Courtesy city of Sandpoint.

From my research, the reason for the sale, or trade, of public land is to alleviate parking and boat ramp issues at City Beach. In addition, the owners of the Edgewater Best Western Motel have stated they expect to construct a larger hotel complex on the existing motel footprint and the city-owned green space to the east of the motel. There are important reasons why the parking issue is a fallacy, and the remedy unnecessary.

1. There are approximately 16 weekend days between July 4 and Labor Day each summer.  These are the number of days there are parking and boat ramp issues at City Beach. For less than 4% of a year, the city wants to relinquish control or ownership of the land east of the Edgewater Best Western. That percentage does not justify trading open space with incredible views for a parking lot adjacent to a railroad.

2. When parking is perceived as an issue the first response is to provide more parking. This seems logical. But, when parking is a premium, one can rarely provide enough parking — demand will outstrip supply. Again, providing additional parking for less than 4% of a year leaves a sea of asphalt for the remaining 96% of the year. Increasing the size of a parking lot with minimal stormwater treatment does not fulfill the objectives of the Sandpoint Comprehensive Plan to protect the lake and river.

3. The objectives of the city can be met by not proceeding with the land transaction.  Relocating the boat ramp to the southwest corner of existing city-owned land accomplishes the separation between boaters and others without giving up the green space east of the Edgewater Best Western.

Every effort should be made by the City Council to maintain high-value green space adjacent to waterfront property. They are the trustees for city residents and land-owning taxpayers within the city. I believe it is their responsibility to take the long view and decide what the city will need and want generations from now.

Additionally, every effort should be made to invite the public to use the green space east of the Edgewater Best Western. Currently, the general public is mostly unaware that the city owns this green space. Structural encroachments into the green space further discourage the public from using this city-owned land.

In addition to adding additional parking at City Beach, this transaction appears to be for the benefit of the owners of the Edgewater Best Western so that they can erect a larger structure.  Sandpoint should not be in the business of providing green space adjacent to waterfront for the desires of private enterprise.

In summary, I oppose this transaction and request that the Sandpoint City Council search their souls to determine what is best for today’s Sandpoint and Sandpoint in the coming decades. Relinquishing the property east of the Edgewater Best Western for a parking lot adjacent to a railroad is not my idea of a good deal. I trust it is not the City Council’s idea of a good deal either.

Let the City Council know how you feel about the draft plan. This link directs you to City Council contact information: sandpointidaho.gov/your-government/contact-us.