Sandpoint council members reformed the city’s noise ordinance Wednesday night, the latest in a series of efforts to clamp down on public disturbances.

Significantly more detailed than the city code it replaces, the new ordinance outlines different standards for a variety of situations, businesses and events. The idea is to provide sufficient leeway for permitted events or businesses while reducing the number of disruptions from noisy neighbors or protesters. However, the ordinance is also careful to not regulate the content of messages, which are protected by First Amendment rights. 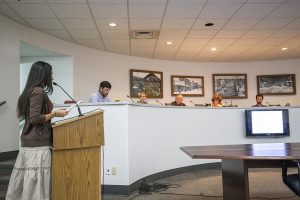 “You cannot consider content of the speech as part of a noise ordinance, but you can reasonably regulate amplification, music, bells, voice level and location,” Sandpoint City Attorney Scot Campbell said in a memo to city officials.

Council members asked Campbell to revise the ordinance after receiving several complaints about anti-abortion protesters staging demonstrations at Sandpoint Farmers’ Market. Several market vendors and administrators said that because they used loudspeakers near the market, it was difficult to complete sales, engage in conversation or enjoy the live music over the noise.

The new ordinance addresses this under the loudspeakers section by prohibiting their use when plainly audible across a property boundary or a distance of 100 feet or more on public property. Sound exceeding 60 decibels at those distances is objective evidence of a violation. The idea is to place hard limits on how loud a person can be without infringing on their free speech.

“A person might be annoyed or disturbed by the content of a person’s speech, but it cannot be enforced under this noise ordinance,” Campbell wrote in his memo. “As a result, the application of this Ordinance must be made on a case by case basis, each application is subject to challenge in the courts.”

Although the loud market protests moved the ordinance forward, the revisions should come in handy for people dealing with noisy neighbors. The city has received complaints in the past from residents who have had evenings disturbed by loud parties or activity but found the old ordinance couldn’t solve the problem.