If 2016 bummed you out, we’re going to start 2017 out right with an uplifting article about one of the most inspirational humans to ever walk the Earth.

Have you ever had someone tell you that you can’t do something? Usually once you’ve finished trying it for the first time? Feels pretty crappy, doesn’t it?

How often do you think that happens in your life? 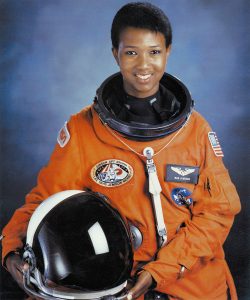 Imagine that, now imagine being an African American woman born in 1956 Alabama, while segregation was still a thing.

Meet Mae Jemison. She’s what you might call a collector of titles, honors and awards; a maker of history. Her accolades are so plentiful that I’m honestly stuck here wondering where in the world I’m going to start talking about this incredible woman’s life.

She was born in Decatur, Ala. in 1956. When she was just three years old, her parents decided to move the family to Chicago, where the education and jobs were better. This was a brilliant idea, but it didn’t remove the stigma of being a black girl before the Civil Rights era came into full swing. Fortunately, Mae had a powerhouse of a personality.

She once recalled a conversation she had with a teacher in kindergarten, where she stated that she wanted to be scientist when she grew up. Her teacher thought that was a cute pipe dream, and attempted to correct her by replying “Don’t you mean a nurse?”.

She replied thusly: “Now, there’s nothing wrong with being a nurse, but that’s just not what I want to be.”

I don’t know about you, but I’m pretty sure that while I was in kindergarten I was gluing my hands together and pretending to be a sticky dinosaur, and if my teacher corrected me I was expected to fall in line. I very much admire that about this woman—she knew what she wanted and she wouldn’t let anyone stop her.

Mae Jemison was a born explorer, and the very definition of a renaissance woman at heart. As a teenager she took up dancing, all kinds of professional dancing from all over the world from Jazz and Swing to traditional Japanese dancing. She even tried out for the part of Maria in “West Side Story,” you know, one of the most prolific musicals the world has ever seen.

She graduated high school and went to Stanford University at the age of 16.

If that sentence doesn’t impress you, I don’t know what’s wrong with you, because that’s huge for anyone, especially someone that society has stacked the deck against. She went on to achieve a Bachelor’s in Science in chemical engineering while also achieving the requirements for a Bachelor’s in the Arts for African and Afro-American studies.

She received her doctorate in Medicine at 28 from Cornell, and went out to travel the world to provide medical assistance to people from impoverished countries on every hemisphere.

Most people feel as though they’ve accomplished their dream by this point. This is where they’ll settle into a specialty and live high and proud atop their accomplishments for the rest of their days.

Mae Jemison decided to double down like a BOSS.

She served in the Peace Corps., then took a leap and applied to become an astronaut with NASA. She was accepted, one of the lucky and skilled few out of over 2,000 other applicants. She was selected for launch support at first, but made history on September 12, 1992 when she became the first African American woman in space.

She’s worked as a professor for Cornell University and Dartmouth College and is a major advocate for racial diversity in STEM fields. She even got to make an appearance in “Star Trek: The Next Generation” (which is a huge deal when she cited Nichelle Nichols, who played Uhura in The Original Series, as one of her heroes.), something that everyone who hasn’t been in “Star Trek” should be hugely jealous of.

I’m not even scratching the surface of this woman’s lifelong achievements. There is no way I could accurately convey how freaking awesome she is even without a number crunch.

What I hoped to share most in this article was the inspiration I felt reading about her life.

Show the world that holding you down only makes you push up harder. Break social convention and inspire others. It will be hard, and it sure as hell won’t get handed to you, but if you put in the work you will achieve anything you set out to achieve. While I could tell you this all day, she proved it many times over. Let her hard work and limitless achievements be all the proof you need that putting your mind and your back into something, no matter how difficult, will get it done.