While the project to remake War Memorial Field has been a local conversation point for months, it hasn’t yet made the leap from the drawing board into reality. The crucial first step in bringing that to fruition is approaching, as construction bids are due to be opened Thursday, March 12 in the City Council Chambers. 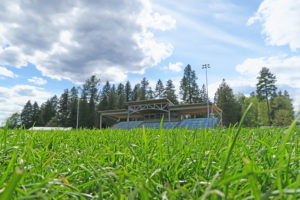 The natural grass at Memorial Field will be replaced by artificial turf in Spring 2020. Photo by Ben Olson.

City officials will publicly read the bids beginning at 2 p.m. Work on the project, with an estimated cost of $2 million-$4 million, includes a new field configuration with artificial turf and related civil and electrical improvements. Once the bids are read, officials will verify that they are responsible bidders, check their math and review the costs as they relate to the city’s budget for the project.

According to Sandpoint City Manager Jennifer Stapleton, the city anticipates issuing a notice of intent to award as early as Friday, March 13 — though that may be delayed until after the weekend, owing to the complexity of the project. The City Council may make a decision on the award at its regular Wednesday, March 18 meeting, “which is in line with the schedule we have previously presented,” she said. Authorization to begin work on the site is expected on Wednesday, April 1.

Phase 1 of the project is intended to be “barebones,” Sandpoint Public Works Director Amanda Wilson said at the Feb. 6 meeting of the City Council, in an effort to have the work mostly completed by July 21. The Festival at Sandpoint, which has expressed concerns about its ability to work within that timeline, would need to set up on the new field no later than July 30.

To view plans, specifications, forms and other information related to the project, go to https://www.sandpointidaho.gov/doing-business/bids-and-rfps and select bid No. 20-5300-2.