It’s been an exciting year for the Sandpoint Music Conservatory. In September 2019, MCS announced it had completed the purchase of the downtown Sandpoint building at 110 Main St., which the nonprofit arts organization occupied for a decade. With the Pend Oreille Arts Council also moving into the same building, the conservatory’s mission to provide top-notch fine arts education to students of all ages and abilities became even more centralized. 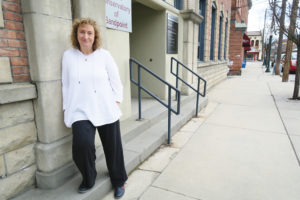 Music Conservatory of Sandpoint executive director Karin Wedemeyer stands outside the building at 110 Main St., which MCS acquired in 2019. Photo by Ben Olson.

Looking to the future, MCS Executive Director Karin Wedemeyer recently announced that the 2020 Summer Academy offerings will expand in preparation for some exciting changes in 2021.

“We have created Sandpoint Celebrates Arts and Culture,” Wedemeyer told the Reader. “This is a partnership between POAC, Lost Horse Press and MCS.”

The collaborative effort acts as an umbrella for popular events including the Summer Academy, the Bel Canto Choir performance June 28, as well as the Arts and Crafts Fair and annual Montana Shakespeare in the Parks — both occurring in August.

The impetus for Sandpoint Celebrates Arts and Culture is for arts organizations to combine forces to promote a wider variety of arts outside of their respective spheres of influence — in the process, broadening the horizons of students and art lovers.

“This is a coming together of visual arts and literary arts,” Wedemeyer said. “Rather than compartmentalizing the arts, we want to bring them together.”

The format of the annual Summer Academy will change slightly this year, Wedemeyer said. Where before the academy operated over a period of four weeks, with different music camps at different times, this year it will be modeled after what participants might find at music camps like Interlochen Michigan or the Boston University Tanglewood Institute — both highly immersive and world famous camps featuring noted instructors teaching a multitude of different disciplines, some of which reach beyond music.

Wedemeyer said the goal is to tap into the Spokane Symphony in 2021 to spearhead the immersive camp experience.

“We’re inviting students to participate this year, looking for feedback and pricing it in a really affordable way,” Wedemeyer said.

Students will now get to choose majors such as orchestra, theater, choir, piano and electives from percussion to improv, fiddle and ukulele. Music theory is also included. As a result, the Summer Academy is now condensed to two weeks of more intense activities.

The experience spans from July 27 to Aug. 7, culminating with a performance Aug. 7 on the Panida Theater main stage.

Camp tuition ranges from $125 to $225 for two weeks, with an early registration discount available, reducing the whole-day camp to $195. The early bird registration deadline is June 15. To register, or for more information about the Summer Academy or MCS in general, visit sandpointconservatory.org or call 208-265-444. Better yet, don’t be afraid to stop into the MCS office at 110 Main St. to learn more.

“We’re very excited looking into the future,” Wedemeyer said. “There’s a lot of synergy here and we’re laying the foundation of something truly exciting for our students and community.”