Bonner County voters cast 6,053 ballots in the March 10 presidential primary election, nominating Former Vice President Joe Biden to be the Democratic standard bearer in November, and returning President Donald Trump to the top of the Republican ticket, where he’ll pursue a second term.

According to county elections supervisor Charlie Wurm, the turnout was lighter than expected, at about 22%.

“I think the Democrat candidate dropouts the week before the election dampened the excitement some,” he said.

Biden carried the Democratic nomination with 1,274 votes or 47.63%. Vermont Sen. Bernie Sanders came in second, with 1,126 votes amounting to 42.09%. The next nearest contender was Massachusetts Sen. Elizabeth Warren, who garnered 94 votes — despite dropping out of the race about a week before the primaries.

As expected, Trump swept the Bonner County Republican primary with 3,162 votes, amounting to 94.59%. Bill Weld, the president’s next-nearest competitor, had a showing of 86 votes or 2.57%.

Don Blankenship led the field among Constitution Party candidates with seven votes, or 29.17%, followed by Daniel Clyde Cummings, with six votes or 25%.

Results are unofficial until they can be canvassed on Tuesday, March 17 at 1 p.m.

Sanders’ loss to Biden in Idaho’s first Democratic presidential primary was a departure from his win at the 2016 Idaho caucus. 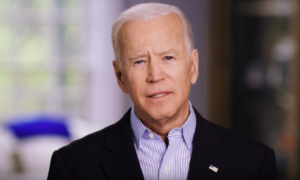 Then, Sanders drew 78% of the vote, but the March 10 primary drew far more people to the polls than the caucus — as Boise State Public Radio reports, by a magnitude of three-quarters more voters. Still, when 23,000 people showed up to caucus in Ada County — the largest such gathering in the history of the United States — it spurred confusion, delays and chaos, resulting in this year’s switch to a primary.

The regular Idaho primary election — in which voters will cast ballots for congressional, state and county offices — will take place Tuesday, May 19.

The deadline to change party affiliation or declare as an “unaffiliated” voter is Friday, March 13.

Depending on how a voter is affiliated will determine what ballot he or she receives at the polls. The Idaho Republican Party has a closed primary, which means only those who have declared themselves to be a member of the party will be allowed to vote in the election. The Democratic and Constitution parties allow both party members and unaffiliated voters to take part in their primaries.

“We are seeing a pretty steady stream of people changing their afiliations, although it’s not as much as I expected,” Wurm said.

Candidates in the May primary will be announced after the March 13 filing deadline. Pre-registration to vote ends Friday, April 24, with paper forms due by 5 p.m. and a deadline of midnight for online registration. Early voting for the begins Monday, April 27 with the deadline for absentee and early voting at 5 p.m. on Friday, May 15.