Skip Lassen and Jenny Post, like many rural North Idaho residents, found their dream homes in the woods, miles from town.

Lassen’s home is off the grid on 50 acres accessed by the private Coyote Trail road in the foothills of the Cabinet Mountains. Post lives nearby.

Most of the land in the area is divided into 10-acre parcels and it’s all designated as Ag/Forest in the county’s comprehensive land use plan, which means properties cannot be subdivided into parcels smaller than 10 acres.

“I live 20 miles out for a reason,” Lassen said. “I don’t live out there for increased population density.”

So when a nearby landowner applied to Bonner County to divide a 20-plus-acre lot into five-acre parcels, Lassen and Post and the other neighbors were concerned. They worried about traffic on their road and increased fire danger, as the area is largely forested. 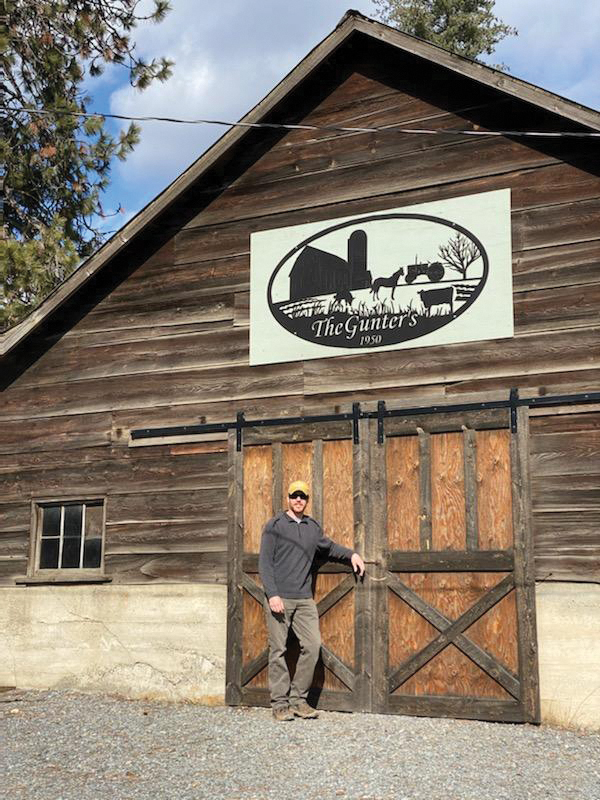 Doug Gunter stands by a barn built in 1950 on his property in Sagle. Gunter’s great-great-grandparents first moved to a cabin by Shepherd Lake in 1914 and the family has largely remained in Sagle ever since. Photo courtesy the Gunter family.

“It’s a tinderbox,” Lassen said. “You increase density and your fire danger goes up.”

Despite the concerns of several neighbors, the county planning staff recommended amending the comp plan and zoning to allow the higher density. The request was unanimously approved by both the Planning and Zoning Commission and the board of commissioner in the fall.

“It was like they were going through their perfunctory role, listened to the objections and they dismissed it,” said Lassen who attended the P&Z hearing.

About the same time, a group of Selle Valley volunteers were wrapping up three years of meetings on a comp plan update for the Selle Valley and Samuels area.

Like other “subarea” plans around the county, the committee made it clear their intent was to protect their rural quality of life. The process began with a couple of rowdy community meetings three years ago at Northside Elementary School.

“The people were yelling, ‘Leave it [the valley] alone! We don’t want to change anything,’” recalled Fred Omodt.

Omodt later became chair of the Selle-Samuels Subarea Plan Committee, convened by the county to review the comp plan and recommend changes to meet the needs and desires of the rural community.

The county comp plan is the guiding document for growth and land use in the county, setting the overarching goals and objectives. The county’s zoning codes are the laws that carry out the intent of the plan.

The comp plan and land use map were last updated in 2005. Before the update, most of the county’s land use was designated Rural Residential, which meant that lots in those areas could be as small as five acres.

The county hired planning consultants who hosted community meetings in which residents voiced concerns about sprawl, strip development and leap-frogging growth, according to a 2005 story in the Spokesman-Review.

The county responded by changing the land use designation for much of the outlying rural areas to Ag/Forest — with 10-acre lot minimums.

Judging from the work of the subarea plan committees around the county, that’s something they want to see maintained.

“I know there’s a demand to be up in this area,” said Doug Gunter, a member of the Sagle Subarea Plan Committee. “We want to keep Sagle rural as much as possible.”

Gunter describes himself as an “old Sagle farm boy.” His grandfather was born in a wall tent on the homestead off Sagle Road, where Gunter raised his 4-H steers, and he wants the same rural lifestyle for his own three children.

Gunter’s uncle and father were involved in crafting earlier versions of the county’s comp plan. Gunter attended the initial Sagle subarea meetings, because it was his turn to defend the rural lifestyle from the inevitable growth that was coming.

At the large community meetings at Sagle Elementary School in 2016, he found his neighbors largely agreed with his point of view.

“It was undeniable what 90% of the people wanted,” he said.

But he questions if county leadership shares those desires.

In a December workshop, after the Selle-Samuels committee submitted its plan, the county commissioners made a deadline for all the committees to finish their plans, with Commissioner Dan McDonald declaring “the Selle thing” a “waste of paper, time and effort.”

McDonald’s comments grated on volunteers like Gunter: “Since we had those meetings at Sagle school, my life became a lot busier with three new kids, but I stayed committed because I know what [the subarea groups] are capable of.”

Frequently, the work of those committees centers on private property rights — which Gunter sees as a balancing act between adjacent landowners. Not everyone agrees, with many holding private property rights as “100%” sacred, according to Gunter, so given the passions and differences of opinions on the committee, he said it’s no wonder it’s taken years to put a subarea plan together.

Once the subarea plans are done, the P&Z Commission will take the work under advisement and provide its own set of recommendations for updating the comp plan and land use map, according to county Planning Director Milton Ollerton.

“I don’t think it was a waste of time,” Ollerton said. “I have a clearer picture of how people want those areas to develop.”

Ollerton has told committee members that one intention of the revisions was to eliminate loopholes that allow development to occur that isn’t intended in the current comp plan.

But Gunter and Omodt see the county creating work-arounds for the density limits in the rural areas — such as the new recreational vehicle rule, which lifted the 120-day limit of occupancy of an RV, and allows two per every lot over an acre in size. The Selle-Samuels committee banned the RV rule in its plan.

“The staff would come in with these recommendations that did not uphold the comp plan,” Omodt said. “And it seems like no matter what they come forth with, [the commission] would rubber stamp it.”

That echoes Lassen’s impression of the case near his property off Coyote Trail: “They already had their minds made up.”

One goal of the comp plan is to “encourage the community to grow while retaining its rural character and protecting its unique natural resources.”

The zoning code states that the Ag/Forest 10-acre zone is appropriate for areas that do not necessarily have “prime agricultural soils” but where agricultural and forestry pursuits are still viable. Those areas can also be “within or adjacent to areas of city impact or where lands are afforded fire protection, access to standard roads and other services.”

Yet, in the case pointed to by Lassen and Post, staff argued that because the property in question did not have steep slopes nor prime ag soil, was on a county-maintained road — Upper Gold Creek Road borders the short side, with private Coyote Trail along the length — and was within a fire district, there appeared to “no reason” why the parcel would fall under Ag/Forest use designation in the comp plan.

The result is a rectangular Rural Residential island in a sea of Ag/Forest land on the county’s land use map.

The same argument essentially could be made for hundreds of properties in the Selle Valley, eventually resulting in land divisions (most likely through the county’s new streamlined “minor land division” process, without public input), and leading to sprawl and traffic jams on Colburn Culver Road — precisely what residents told consultants they didn’t want back in 2005, and what residents are trying to prevent now with their subarea plans.

Across the county, in the Hoodoo Valley, the staff last month made the opposite argument, selecting different language from the comp plan, such as the intention “for new development to locate in areas with similar densities and compatible uses.”

In the Hoodoo case, the staff focused on fire danger, traffic and other issues residents also tried to raise up Gold Creek — to recommend denial of a similar request to change the comp plan to allow five-acre parcels. The Hoodoo property is much larger and bordered by Idaho state lands, but it also borders a subdivision with 48 parcels ranging from two to nine acres in size.

The biggest difference between the two properties — other than size — was dirt. The Hoodoo property has prime agricultural soils. Ollerton said the soil was a deciding factor, but downplayed the influence of a petition with 111 signatures opposing the Hoodoo rezone.

All this is now rather meaningless to Post and Lassen and their dispirited neighbors up Gold Creek, who don’t understand the official rationale for why their neighborhood shouldn’t also remain a haven for low-density living and wildlife.

“Everyone did their thing, everyone participated, and they said, ‘Well, you’re just like Rapid Lightning and there’s lots of five-acre parcels there,’” Post said. “I see why people get apathy — they feel like they have no power. It’s like I can’t do anything about it, so what the heck.”

Susan Drumheller is a 30-year resident of North Idaho, a former Spokesman-Review reporter and a member of the board of Project 7B, a local nonprofit with the mission to support land use planning based on locally shared values and aspirations. For information or to support Project 7B’s efforts to track land use planning and promote public involvement, go to project7B.org.

This is Part 2 in a two-part series on growth in Bonner County. Find Part 1, “Zoom boom: Land use priorities collide in the ‘Zoom economy,’” in the Feb. 25 edition of the Sandpoint Reader and online at sandpointreader.com.