It’s been a whirlwind year locally, statewide and nationally. Whether it was major street and infrastructure developments in Sandpoint or the Trump Administration’s first year leading the U.S., change was the order of the day. Here are just a few of the biggest stories that kept our office busy in 2017.

The Idaho State Legislature kicked off to a salacious start in January when North Idaho’s Rep. Heather Scott, R-Blanchard, got herself in hot water with House leadership. According to press reports, Scott, after learning she had not received any leadership assignments, said women only advance in the Legislature if they “spread their legs.”

As controversy spread throughout the Legislature, Idaho Speaker of the House Scott Bedke disciplined Scott by removing her committee assignments. It wasn’t a toothless punishment — without committee assignments, a legislator has limited ability to shape bills before they reach the floor for a vote. After a four-week suspension, Scott apologized for her comments and was restored to her committees.

This year was a worrying one for those concerned about train derailments in Sandpoint. While there were no train accidents in town this year, two accidents in the region drove conservation discussion about trains carrying hazardous materials possibly derailing in Lake Pend Oreille.

The first derailment occurred in March, upending 12 cars about four miles north from Highway 2 on Moyie River Road in Boundary County. Triggered by a mudslide, the derailment resulted in tons of grain being spilled across the landscape. The second happened in August, when 31 rail cars spilled 3,500 tons of coal along the banks of and into the Clark Fork River near Noxon, Mont. 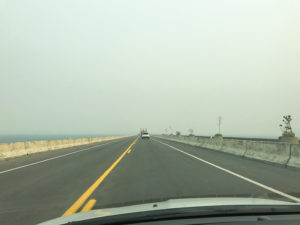 A smoky view from the Long Bridge a day after Labor Day when the air quality index was the worst in the nation. Photo by Lyndsie Kiebert.

The Sandpoint area was mercifully spared from the wildfires that ravaged much of the western United States this year, but that doesn’t mean North Idaho got off scot-free. On Labor Day, multiple news outlets reported that Sandpoint had the worst air quality in the nation for several hours, the result of smoke blowing in from wildfires in Montana, Canada and western states. At an air quality rating of 418, the air was dangerous to breathe for everyone regardless of health, but far more concerning to those with medical issues.

While the smoke-clogged air was no picnic, North Idaho experienced a far gentler fire season compared to summer 2015, when wildfires threatened several regional communities. The same could not be said this year for other western towns like Missoula and its surrounding areas.

The transition to two-way streets

Sandpoint’s plan to change to a two-way street system was a long time coming. Even so, there was no fully preparing for the rocky first weeks as drivers adjusted to the changes.

After the Sandpoint City Council voted against Idaho Transportation Department’s proposed U.S. 2 extension that would have diverted cars from downtown Sandpoint, the two government bodies agreed upon an alternative. Under the new arrangement, U.S. 2 traffic flowed onto a two-way Fifth Avenue, with the rest of downtown reconfigured to two-way around that flow plan. 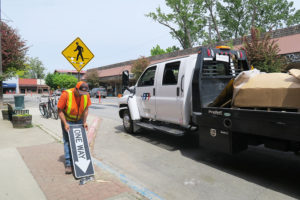 A crewmember with the city of Sandpoint pulls down a one-way sign to make way for the transition to two-way streets. Photo by Ben Olson.

It took drivers some time to relearn their driving habits and adjust their routes in the new system. Combined with some closed routes due to construction, it made for an atypical summer of driving. As controversial as any major change to traffic, the new system spurred much debate and attracted both critics and supporters.

For the City Council, the street changes are part of a long-term revitalization plan. With downtown street management back under city control, local officials intend to initiate a series of aesthetic, infrastructure and functional improvements, which started this year with sewer work.

The fate of the University of Idaho property

In September, city officials announced they were in talks with the University of Idaho, which declared its intention to offload its 77-acre property on Boyer Avenue. The news set off a firestrorm of concern that the property, which is a prime location for outdoor recreation, would be sold off for private development. However, the University of Idaho said it intended to work with the city and public in the hopes of finding a mutually favorable outcome.

Over the course of several workshops, city officials and members of the public identified several possible uses for the property, which included affordable housing and its development into a rec center. The city also voted to pursue a grant from the LOR Foundation. While there’s no guarantee that the city will actually get the grant, it could pave the way for the property’s public purchase, either in part or in whole.

A new Sandpoint City Council will convene in January, ushering in a new body to conduct the public’s affairs. This year saw a large lineup of candidates throw their hats in the ring, with City Council President Shannon Williamson seeking re-election and Joel Aispuro, Jeff Bohnhof, John Darling, Mose Dunkel and Robert Jediny hoping to start their first term.