Among the items in the city of Sandpoint’s proposed fiscal year 2023 budget are a number of big-ticket capital improvement projects, as well as a few expanded and new city positions — specifically in the areas of parks and historic preservation. 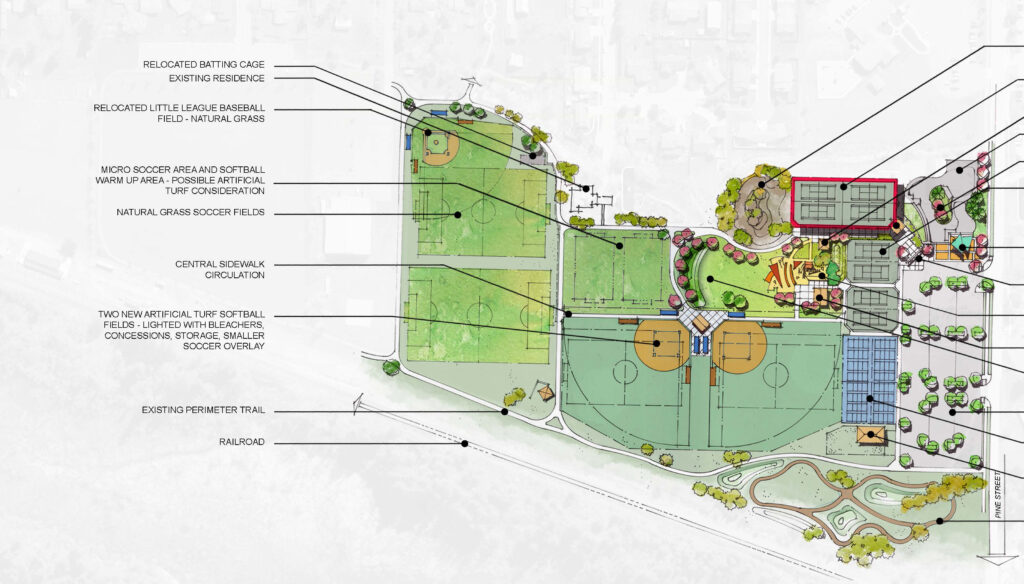 A rendering of the proposed improvements to Travers Park, which will also include the James E. Russell Sports Center and skatepark expansion. Image courtesy city of Sandpoint.

The newly created arts and historic preservation officer will be Heather Upton, the former executive director of the Bonner County Historical Society and Museum, and budgeted as a ¾ full-time position. The new City Hall job came out of the Afts, Culture and Historic Preservation Master Plan, and will be tasked with implementing that plan. The position will also play a part in reviewing development plans to ensure they meet the community’s vision for its historic look and feel.

“There’s been much conversation and much debate about our downtown and its historic nature and the building, and I understand that we are having some growing pains and some struggles and some very important voices that need to be heard about the preservation of our downtown,” he said, asking that Upton work closely with city staff to determine “what historic districts in downtown look like and really start to refine what we want downtown to look like.”

He added: “We’ve heard very clearly from our community and citizens about what they don’t like, so let’s start entering into what they do like and what they do want.”

Sandpoint City Administrator Jennifer Stapleton said that is certainly part of the historic preservation officer’s job, and will dovetail with the purview of the new park planning and development manager, Maeve Nevins-Lauter.

Stapleton said both positions are intended to bring parks and arts and culture planning in-house, rather than relying on citizen advisory committees, as the city has in the past. In this way, Sandpoint will be “functioning like a larger city does,” with dedicated positions for assigning planning reviews focused on specific areas such as historic preservation.

The creation of a broader planning team is intended to get ahead of the rapid pace of change in the city, which Stapleton said has morphed from planning for the future into trying to adjust to meet evolving current needs that weren’t accounted for in past plans.

“[T]he city has historically done a great job of planning and planning for the future, but even with all of that planning I don’t think anybody planned for the growth that we are currently seeing now,” she said.

City planners will have much to work with in the FY’23 budget, especially in terms of capital improvement projects totalling more than $21.5 million.

• $8 million for improvements at Travers Park, including the James E. Russell Sports Center and the skate park expansion;

• $1.6 million for a trio of projects at City Hall, including an upstairs remodel, as well as generator and HVAC improvements;

Also in the capital improvement budget is funding for a number of other street, sidewalk and bike path projects, including the Division Avenue Corridor Project and Superior Street and Baldy Mountain Road pathways. Of note as well is $400,000 for a stormwater project at Farmin’s Landing and a number of other wastewater treatment facility improvements.

The budget book on the front page of the city’s website — sandpointidaho.gov — has a project-by-project description of all proposed capital improvements, including narratives, maps, renderings, costs and timelines.

A public presentation of the proposed FY’23 budget is scheduled for 5:30 p.m., Wednesday, Aug. 17 in the Council Chambers at City Hall (1123 Lake St.). To view an Aug. 3 budget workshop, visit the city of Sandpoint’s YouTube channel. To participate in the Aug. 17 meeting via zoom, go to sandpointidaho.gov and click on the “meetings” tab.