Even when the whole world has been found, there is a frontier of personal experience that cannot be exhausted by a lifetime of curiosity. Oops, wrong page. The shape of the toilets here is pleasant.

So began my journal documenting six weeks of travel in Iceland in the summer of 2014. 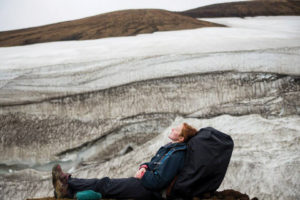 Resting on the trail in the shadow of a mighty glacier. All photos by Kelly McMasters.

Mere months before Instagram over-exposed the little green island, three art students with three suitcases full of peanut butter, three brains half-full of dubious Icelandic vocabulary, and three very different passions stepped off a plane onto a rocky field. One cared about telling people’s everyday stories through photos. One just loved birds. One thought she was going to discover the secrets to sustainable textile production by hanging out with sheep (this one was me). All three wanted to live and consume more thoughtfully.

We had designed our own research curriculum and studied Icelandic for six months. We had coaxed our university into giving us reign, upon our return, over its first student-curated gallery exhibit. A few benefactors expected us to write something intelligible about the experience. We were so prepared to try Icelandic, live mindfully and learn about sheep. Then we took a rainy bus ride into Reykjavik and discovered that everyone spoke English. We could hardly afford day-old bread, much less “mindful” food. And all the sheep were already released into the mountains for summer pasturing.

After a consolation dinner of peanut butter and mashed potatoes flakes and a sunny night under the solstice sky, we woke with renewed energy. We were here, we had a purpose (however derailed), and we were going to have to make it work one day at a time. So from Akureyri to Hvammstangi, we stumbled, uninvited, into the galleries and homes and factories of artists who taught us about the Icelandic way of creating.

Ragga told us about a card-weaving technique Norsemen learned from American Indians. They wove love poems into thin ribbons of fabric that they would wrap around the arm of their loves. Edda Borg showed us how her family tanned and dyed fish leather as a by-product of the ancestral fishing industry. Shanko showed us her round rugs that help people spend long periods of time sitting outside in nature without getting cold bottoms. A blanket designer shared the fantastic tales of selkies and baby-snatching eagles and shamans that inspires her artwork. 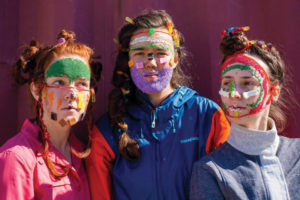 Decorated with honey and candy as part of a performance art piece by Maria Isabel Vargas, an artist in residence from Colombia.

Everyone we met had a thoughtful reason for creating, but we wondered if people were as thoughtful about consuming. So we asked everyone we met, “What is the most important thing you own?” Many people answered, “Family! Does that count?” Others said “time,” “my hands,” “my dog,” and “the soul.” Gunnar, our language instructor and friend, gave my favorite response. “I do not believe in ownership; love is most important. Life is love.”

That sentiment rang true across Iceland. We received such vast love, and from complete strangers. A driver dropped us hitchhikers off at the wrong house, but when Guðrún found us in her yard, she welcomed us in. She fed us frozen shark meat (a delicacy), filled our pockets with handspun, hand-dyed yarn, and drove us 20 kilometers into town to meet her best friend, the mother of Icelandic musician Ásgeir. A few months later, we saw their sons perform together in Indianapolis and yelled at the end of the show, “We love your moms!” which inexplicably seemed to embarrass them.

The best hitchhiking experience was with Keez and Pieter from Amsterdam, who were taking their mother Veronie on a road trip for her 80th birthday. She whispered stories to us of hitchhiking in Norway as a teenager, while her sons weaved the rust-bucket rental van down the highway. Then it sputtered to a dead stop in the shadow of the mighty Vatnajökull glacier. A call to the nearest town, 80 kilometers away, confirmed that help would not be on its way for at least 15 hours. While we waited, we scrambled down the gorge and took our first taste of “pure” glacial water, full of enough silt to scratch the enamel off our teeth.

We made more mistakes than trying to drink runoff. I ate minke whale steaks not once, but twice. Whale hunting is legal in Iceland, and the minke is not endangered, but the more I learn about whales and our fragile oceans, the more I repent of those two choices. 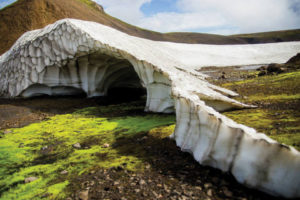 A cavelike formation, common along the edges of glaciers, creates a dangerous air pocket under the surface.

The biggest mistake was the time we could have been kidnapped or worse by two men making angry phone calls in a boat garage on the Reykjavik harbor pier, looking like they came straight out of a ‘90s mafia movie. They were trying to talk us into transporting stolen goods by the time we came to our senses and finally fled.

Though our carefully laid plans were shattered during the first days, good fortune was on our side throughout the trip. After a long hike, three Estonian women gave us mushrooms in a sauna and playfully laughed at our hairy legs before telling us that they had not been able to identify the wild mushrooms we had already eaten. Somehow we lived. We were invited to a remote fjord to play in the celebrated and vicious Myrarboltinn “swamp soccer” tournament. Best of all, when we passed by Sigur Ros’ house/recording studio while they were away on tour, their landscaper told us we could “go on in and take a look around.”

Speaking of taking a look around, I would be remiss not to mention Iceland’s immortal beauty. It is greener than photos could ever capture. The geysers, puffins, waterfalls and volcanoes are ridiculously majestic. If you are one tenth as sentimental as I am, your eyes would overflow with joy watching the changing landscape.

So what did I bring home from our Icelandic travels, aside from a bag of unprocessed wool smuggled through customs? The realization that being a thoughtful consumer is not easy, and perhaps never becomes so, but is still worth striving for. The ability to find joy in upturned plans. A confirmation of my first impression: they do indeed have pleasantly shaped toilets. And perhaps most lasting, a phrase I have to tell myself nearly every day: “Þetta reddast,” or, “It will all work out OK.”

Hannah Combs is the Arts Administrator for the Pend Oreille Arts Council in Sandpoint.