A public presentation of the budget is scheduled for the regular City Council meeting at 5:30 p.m. on Wednesday, Aug. 17 at City Hall (1123 Lake St.), and the complete budget book is available on the front page of the city’s website at sandpointidaho.gov.

In the meantime, Sandpoint City Administrator Jennifer Stapleton walked council members through the highlights on Aug. 3, beginning with some “shocking numbers,” as she described them, related to property valuations. 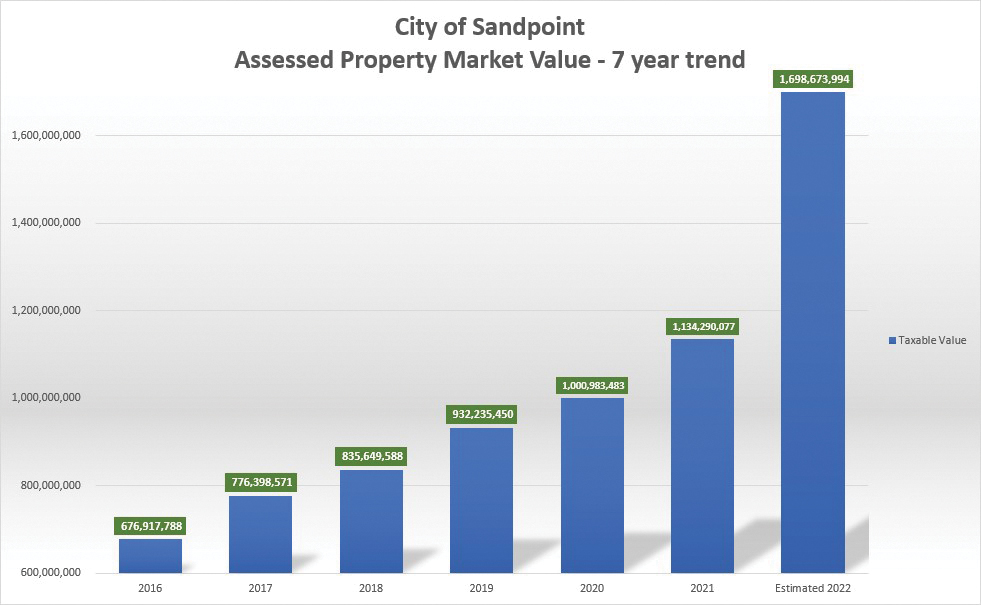 The most dramatic chart presented Aug. 3 showed the skyrocketing taxable value on property in the city, rising from just more than $1.1 billion in 2021 to nearly $1.7 billion in 2022.

“This year, our assessed overall property market value in Sandpoint went up by 50%,” she said, noting that recent year-over-year increases have tended to be within the 20% range.

Taxable value was about $676 million in 2016, representing an increase of more than 150% over the past seven years.

“This is the shock that people are seeing as they’re getting their notices from the assessor’s office for their home valuations,” Stapleton said.

However, just because property values have gone through the roof doesn’t mean that property tax rates will rise by the same rate. The FY’23 budget forecasts an increase of $46,000 in total property taxes to be levied across the entire property tax base.

How that will affect individual property owners depends on the degree to which their valuations increased. According to the city’s calculations, if a median market valued property increased by the average 50%, that property owner’s tax bill would increase by $184.46 for the year.

On the high end, if that property increased in value by 70%, the annual tax increase would be $421.55. On the lower end, if valuations increased less than 33.75%, property owners would actually see a reduction in their tax bill.

Councilor Jason Welker pointed out that the greatest tax burden is going to fall on the homes with the highest values, particularly because they were likely far above the median market value to begin with.

“Likewise, that reduction would probably be more noticeable for somebody living in a house that increased by less than 30%, because that house probably started out below the median home price,” he said, underscoring that “a lot of the money coming into Sandpoint is monied outside investors or second- or third-homebuyers that can buy with cash that lakefront house or the high-end home that’s already twice the median home price in town.”

Welker added: “We hear all the time, ‘Oh my gosh, my property value goes up, I’m being taxed out of my home.’ If you live in a lakefront house I doubt you have to worry about that and you’re the one who’s going to see the highest burden. If you’re a working class person living in an average priced home, at worst you might see your taxes go up by $180, which is one trip to Winter Ridge in my household. It’s not as bad as everybody thinks.”

Some unique factors are at play with property taxes and valuations this year, Stapleton said, specifically that even as local market values rapidly increase, the FY’23 levy rate on tax per $1,000 of assessed value is going down from $4.13 in 2022 to $2.79 — about half what it was in 2016.

That has a lot to do with a big change the Idaho Legislature made last year to the value of new construction as it comes onto the tax rolls.

Passed as a way to provide property tax relief, House Bill 389 stipulated that new construction comes onto the tax rolls at 90% of its value, essentially providing growth with a discounted levy rate. Whereas the city had originally counted on that new construction being taxable on 100% of its value — amounting to about $85,000 in revenue — HB 389 knocked that number down to just less than $62,000.

Stapleton called that a negative to existing property owners, who must pay tax on the full value of their property while new construction is statutorily protected from paying its fair share into the system, which determines municipalities’ ability to provide services ranging from public safety to utility and street infrastructure.

“So really, existing residences are subsidizing new construction through both a lower levy rate and through the 90% cap on what can be taxed?” Welker asked.

“With these changes that have been made, yes,” Stapleton said. “When we’re in a period of excessive growth like what we are in and then with the change to the current tax year from the past tax year, then our levy rate is lower because of the new growth … “[Y]es, new construction rolls are coming in less than they would have in past years,” she added.

While the effects of HB 389 are being widely felt — “Honestly, every community, every council, every commission board, every district board is probably hearing about this in their budget discussions,” Stapleton said — there’s yet another challenge beyond reduced revenue from new construction.

The Legislature also changed the rules regarding urban renewal districts. Now, when those districts sunset, the properties within them come back on the rolls at 80% of their value, “so that’s even more discounted,” Stapleton added.

Sandpoint has two urban renewal districts: one downtown, which funnels dollars toward projects like street revitalization, and another in the northern part of town, which is going to help fund a large-scale improvement project on Great Northern Road. Both of those districts will sunset in 2029.

“We should talk to our legislators, folks,” Welker said.

Councilor Andy Groat asked why the Legislature would want to reduce the amount of tax revenue available to municipalities, to which Mayor Shelby Rognstad said, “The apparent goal is to bankrupt our towns and cities across Idaho.”

“We all would like property tax relief, but when you’re living in a jurisdiction you also have the expectation for good snow plowing, police services, fire services, adequate maintenance of streets, sidewalk repair, sidewalk improvements and extensions,” Stapleton said, “so that’s the fine balance that we’re always working through with the budget.”

Find the full budget book on the front page of the city’s website: sandpointidaho.gov. Watch the Aug. 3 budget workshop at youtube.com/c/CityofSandpoint. The public budget presentation is scheduled for 5:30 p.m., Wednesday, Aug. 17 in the Council Chambers at City Hall (1123 Lake St.). To participate remotely via Zoom, go to sandpointidaho.gov and click on the “Meetings” tab.