Radius Film Festival back for the second year

The local film fest kicks off June 29 at the Panida

There’s real cinematic talent in the Inland Northwest. The problem is getting it in front of an audience.

Enter the Sandpoint Radius Film Festival. The festival’s central idea is to provide a showcase for short films made in Idaho, Montana Washington and any other location within 400 miles of Sandpoint. It’s a chance for filmmakers to get their work in front of an audience at a festival tailored specifically for them. 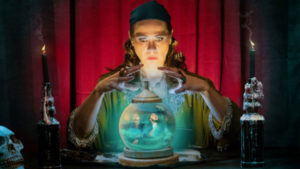 “With so many ‘international’ film festivals out there, we decided it was high time to have a festival that catered to regional talent, with networking and learning opportunities for filmmakers,” Aric Spence, one of the festival organizers, wrote on the Radius website. “This is why we started the Sandpoint Radius Film Festival. We encourage film submissions from within a 400 mile radius around Sandpoint, Idaho.”

Set for June 28 and 29, this year’s festival will expand upon the work established by Radius’ debut year in 2018. The festival kicks off Friday, June 28, with a meet and greet for the filmmakers at the Little Panida Theater complete with a no-host bar. At 8 p.m., there will be a free concert at the Panida Theater featuring Fox & Bones.

The submissions this year range from animation to documentaries to narrative shorts. Some are comedic, like “Terror Reading,” which sees a psychic trying to parse the fate of two friends. Others deal with themes of loss and heartbreak in a creative way, like “Tiny Armor.” Shorts like “One Foggy Night, No One Saw How Morning Came” and “In the House of Paper Flowers,” showcase animation in spectacular ways. And be sure to look out for the surprising ending of “Recommended For You,” where a man finds that the “recommended items” section in an online store seem to have a prophetic quality.

Sandpoint Radius Film Festival features films from around the country, but only those within the 400-mile radius will be shown in competition. What will take the top prize? There’s only one way to find out.

Come out for one or all blocks of the Sandpoint Radius Film Festival when it kicks off Saturday, June 29, at the Panida Theater. Tickets are $8 per block or $15 to attend the entire festival. There are also higher-priced tickets which include donations to keep the festival going. Buy tickets online at https://filmfreeway.com/SandpointRadiusFilmFestival/tickets.