When it comes to variety of live music in Sandpoint, there’s a little slice of heaven for everyone, it seems. No matter what your proclivities, show up at the right venue on the right night, there’s sure to be a band playing your jams. 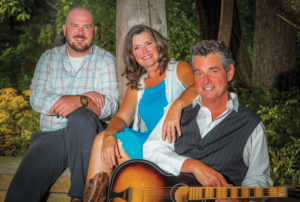 Then there are those special bands that give you a little bit of everything. Bridges Home is one of those bands.

Bridges Home can be roughly encapsulated by the styles of folk, Americana, Celtic, singer-songwriter, roots, rock and indie. In other words, the kitchen sink.

The Sandpoint trio of Dave Gunter, Tami Belzer Gunter and son Paul Gunter have been playing live music in North Idaho for years, and have gained a loyal following for their mutli-instrumentation, soothing harmonies and catchy songs.

Bridges Home will be holding a CD release concert at The Heartwood Center on Wednesday, May 9, at 6:30 p.m.  to celebrate the release of their fourth album. The doors open at 6 p.m., so be sure to show up early to ensure a seat.

The self-titled album features a dozen tracks — all but one traditional song are originals written by Dave — that span the gamut of their ever-evolving sound.

“We started recording in December,” said Dave. “We got together every Sunday morning and played live.”

The live recordings, especially the three-part vocal harmonies, are truly a keystone of the album, which sounds like you’re listening to the band in a warm, cozy living room. Bridges Home captures that “high lonesome” sound you’re always hearing about, but not so lonesome thanks to the special inclusion of some “ringers” that added a bit of extra zest to the mix.

The Gunters were joined by Fiddlin’ Red Simpson on the fiddle and mandolin, Bruce Bishop on the Weissenborn guitar, Truck Mills on the slide guitar, Terry Ludiker on the fiddle and Dennis Coats on the guitar. Rob Kincaid mastered the album.

“I’ve played with a lot of these guys and done some recording with or for a couple of them,” said Dave. “It was one of those, ‘Hey, wanna come play with us?’ kind of situations. Everybody said yes.”

All the special guests will join Bridges Home on stage at The Heartwood Center except Ludiker, who lives in Spokane and can’t attend because of work reasons.

The trio plans to play the album through from beginning to end, but if I know them they’ll probably add a handful of traditional folk songs, older originals and other random ingredients to the stew.

One of the things I like about Bridges Home is their dedication to finding different sounds. In this album alone, they feature the ukulele, banjo, Celtic harp, accordion, mandolin, bodhran, whistles, bass guitar and foot percussion — not to mention all the additional instruments added by their special guests.

The second track, “C’mon Liza,” is a humorous song about a tractor that will have you singing the hook long afterward. “Everybody Loves Me (Why Don’t You?)” takes the band in a bluesy direction, driven by Truck Mills’ slide guitar and smoky vocals by Dave. Tami’s pleasant vocals help establish harmonies on some songs, but on tracks she leads, like “Joni Mitchell Days,” it’s virtually impossible to distinguish Tami’s voice from Mitchell’s.

There are footstomping bluegrass songs driven by fiddles, reflective ballads and Celtic rhythms underscored by Paul’s prowess on the bass. Overall, it’s a great album to take away the rainy day blues or to help highlight a sunny road trip into Montana.

Audience members at next week’s show can pick up the album there, or if they can’t attend, they can purchase it on iTunes, CDBaby.com and Amazon.

The Bridges Home CD Release Concert will be Wednesday, May 9 at 6:30 p.m. A suggested donation of $5 gets you in the door, and the concert is family friendly. Catch up with the band at www.BridgesHomeMusic.com.