My First Love: Ken Griffey Jr. to be inducted to the Baseball Hall of Fame July 24

Most girls had posters in their rooms of boy bands and unicorns from their past. In junior high, my walls were blue and teal, the lovely modern colors of our closest Major League Baseball team. The posters had my idol, Ken Grifffey Jr. 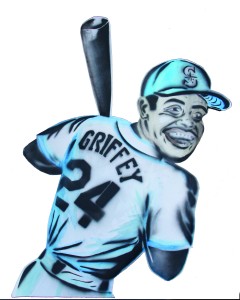 In one poster his smile was beautifully bright, set off by his rich chocolate skin. In another he obviously had just hit a home run, and in the third he was biting his lip, body loaded like a cannon and ready to explode into another home run. Finesse was the word people used for him. It was like baseball was his art, his dance.

I can still hear the way the announcer yelled his name: “Now batting for the Seattle Mariners… Number 24… Keeeeeeeen GriffEEEY… Jooonior!” back in ‘96 when we watched them battle the Yanks in the post season. We all went crazy when we heard that song-like introduction.

One game I saw Griffey hit two home runs. That fluid swing of his and the way that we all watched the ball fly out of the Kingdome was to me the most beautiful thing in the world. I played on the boys’ baseball team that year. Center field, just like Ken Griffey Jr.

The first time I saw him I was around eight, when my dad took me for a field trip to instill a love for “America’s Favorite Pastime.” It helped me understand the dynamics and strategy of the game at a young age, especially when he took me to his personal paradise—a Major League ballpark. I idolized my Dad, so I loved what he loved. At that time, Griffey Sr. was on the Mariner payroll, phasing out, but still playing with his son. They became the first father-son combo to play in the majors at the same time.

My dad would love to see me play for the Mariners, but my short baseball season proved I couldn’t hit the little balls. Alas, I could never be paid for my gift of hitting the much larger softball.

Ken Griffey Jr. was stunning. He could run up a wall and steal a home run from someone with his golden glove, and he could fly a home run into the triple deck as though he were slicing warm butter. While he warmed up he wore his hat backward, laughed and blew bubbles with his “Big League Chew.” He hugged his dad, signed autographs and encouraged fans, and later married a nice wife and had ball playing boys (the eldest, Trey, signed on with the Mariners organization this year—three generations of Mariners).

On Aug. 6 my Dad and I are driving to the “House That Griffey Built” otherwise known as Safeco Field (the massive modern Mariner stadium that they don’t have to share with the Seahawks). The Mariners decided to retire the number 24 that day, as a result of the legend being inducted into the Hall of Fame on July 24.

My dad will be there, at the Hall of Fame in Cooperstown, NY, that weekend, with tickets to the inner sanctum to maybe raise his hand and ask Griffey a question. “Could I hug you,” I’d ask, but I am missing this. I will see him with binoculars as he is applauded for a fine career at Safeco.

Honor is another word used for Griffey. During a time when players were breaking records and getting huge on the now-banned “performance enhancing drugs” Griffey stayed pure and leads a healthy life to this day. His stats and records are indisputable as a result.

One interesting fact about this year’s two inductees is Griffey Jr. was the number one draft pick when he began and Dodger catcher, Mike Piaza, was the last draft pick when he entered. Neither one of those things has ever happened before or since.

In my folks’ storage I found the hard plastic filing box I kept my Griffey cards in, like a buried treasure. There he was on all sixty-seven of my cards, in their protective cases.   Seeing the beautiful photos of this master at his trade, 20 years later, rekindled my love—not just for him, but for the wonderful game of baseball.