The mini-tempest caused by closure of Scotchman Peak Trail #65 for “aggressive mountain goats” is interesting; personally, professionally, and purely culturally. When the Forest Service closed Trail #65 because of a fire in the West Fork of Blue Creek, pretty much everyone understood the problem. The untold story is that if the trail had not been closed on August 14 for fire, it would have been closed on August 17 because of increasingly alarming human/goat interactions. Final straw for the Forest Service and Idaho Department of Fish and Game came when a man was bitten by a goat. It took a couple of stitches to close up the wound. It took a few strokes of an official pen to close the trail. 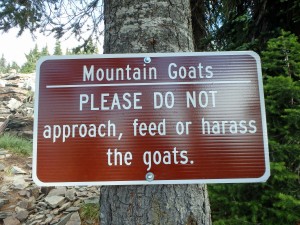 Seriously though… don’t feed the goats!

I happened to meet the guy who was bitten on the day of the bite. On the evening of August 12, I was assessing Friends of Scotchman Peaks Wilderness realignment of the lower section of the trail when I met a man with a nasty gash on his shin.

He sheepishly—or perhaps goatishly—admitted he was near the summit letting a goat lick the sweat off of his legs, but when he decided enough was enough, the goat did not agree. As he backed away, the goat bit him.

The sign—a big, easily read, brown and white Forest Service sign on the trail just below tree line—says, “Mountain Goats. PLEASE DO NOT approach, feed or harass the goats.”

He got a bit indignant. “Yeah, I saw the sign. They should tell the goats not to harass us!”

He was not in the mood for a conversation about habituation. It was, after all, human blood, not goat, that got shed, HIS human blood, so I wished him well and he hobbled off on his way to his appointment with needle and suture.

And then, he told on the goat.

There were many articles written since about the closure. Most of them have a headline like “Aggressive Mountain Goats Force Trail Closure.”

Your honor, I object!  The use of the word “aggressive” puts the onus on the goats, and the goats are not at fault. How about, “Silly Humans Force Trail Closure?”

IDFG is the wildlife manager in that chunk of land, and they are in the process of deciding what to do about the goat / human interface. The Forest Service will work with them to determine when and under what condition the trail will be reopened. It probably won’t be this fall. Before it reopens—and after—IDFG, the Forest Service and FSPW will continue to do as much education as possible about the danger of feeding or approaching any wild animal, and goats particularly.

There are any number of suggestions about what to do regarding the problem, including providing the goats with salt blocks, relocating goats that are habituated, and harassing the goats away from the peak by certain means. My suggestion is that we first use beanbag guns to deter the offending critters. If that doesn’t work, we dart them, collar them and relocate them. The next step, of course, is a very extreme one that we don’t want to take. But, if they don’t stop feeding the goats…

Ridiculous? No more ridiculous than people who blatantly ignore signs and put themselves and goats in danger.

Goats didn’t close the trail. People did, by their own selfish and ill-considered actions.