Sing us a song, you’re the piano man

If you’ve listened to live music in Sandpoint, you’ve probably seen Chris Lynch playing his keyboard all up and down the keys like a hurricane. In this first installment of a new series of interviews with local musicians, I sat down with Lynch and talked about the days he spent on the road, the early Sandpoint music scene, and where he’s at today.

How did you get started playing the piano? 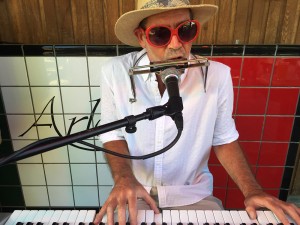 I took maybe a year and a half of lessons between four different teachers when I was younger. I’d do a few months here, a few months there. My mom played piano. When I was five or six, I sat down and started picking out stuff by ear.

Did you have any classical training?

I didn’t have any real theory or training. I would hear a song I liked on the radio and crank it up downstairs, then run upstairs and play the piano with it.

When did you take your next step in music?

I took as many music related classes as I could in high school to bump up my G.P.A. I took stage band and jazz band. Dave Wakely was my jazz band teacher. When I auditioned, I couldn’t read music, but I could read chord charts and improvise. He knew I had ability and placed me in both bands. He was a cool guy. He was younger then, he used to take us to concerts, and got us into prog rock.

I did a couple of garage type bands in high school, but when I was 19, I answered an ad in the paper. There was a band coming to town looking for a keyboard player. The band imploded at the first gig. The bass player was dating the lead singer while the drummer was doing her on the side. After that the booking agent actually called me and said they had another band looking for help in Vancouver. I got on a bus and they hired me on.

What band was that?

We were called Nasty Habit. I was on the road with them for ten or twelve years. We toured all over the west; B.C., all the way to San Diego, all over the west coast. We played 50 weeks out of the year. This was the ‘80s, when it was a big production to tour. We had a huge light show, big kits. They have much more compact sound systems now, but back then, you needed a big rig to cart it all around.

What did you guys play?

Mostly classic rock, new wave. They were billed as a Top 40 rock band. This is back in the day when you’d travel and do a week or two at a club, playing every night. It’s not like that anymore. That scene is dead. I started singing then and fronted a couple of songs. They were really a diverse, fun bunch of guys. When we’d come back to a club on the road, people would remember us and it would be like coming home.

When did you come off the road?

The band disbanded in ‘89. Three of the guys and myself were still around this area, and we’d played here before. We’d played a couple of times at the Cowgirl Corral in Ponderay. Lee Turner, the owner, liked us and gave us a sit down gig, Monday through Saturday. That’s when I met my daughter’s mother and my daughter was born.

What was the music scene like back then in Sandpoint?

The first six months I was here, I saw that Bugatti’s, which is where La Rosa is now, had an Open Mic Night. That’s where I met Charley Packard, Truck Mills, Beth and Cinde. Chris and John the Misty Mountain boys. It was a great scene. People would come up and do their songs and we’d back them with a full band. The owner Steve would play the drums. Most of the local musicians I know today I met there.

Has there been anything like that in recent years?

Back in the early Downtown Crossing days it brought a lot of new, younger faces. Josh Hedlund was starting to play then, Justin Lantrip and Justin Landis, the Shook Twins. There’s a lot of great talent here in town, but there is a lack of venues to showcase people.

Where is your favorite place to play in town?

I like to play anywhere outside in the summer.

Where is your gig now?

In June, I took over Arlo’s on Friday and Saturday night. I’ve played there quite a bit. I played with Neighbor [John Kelley] on opening night there. I really like it there. You meet a lot of great people and entertain them, play songs they want to hear. I’ve gotten a lot of gigs out of it.

You’ve also played with a lot of other bands in town; the Miah Kohal Band, Harold’s IGA, Brian Jacobs. What’s it like sitting in with so many different projects?

Whoever asks me to play, I’m always up for it. The general comraderie of local musicians is great. It’s not a contest, there are no egos. Some nights its phenomenal, other nights it falls short. You always seem to find a moment that is stellar. I just like to play.

You can catch Chris Lynch every Friday and Saturday night at Arlo’s Ristorante on First Avenue. He usually starts around 6 p.m.