Bonner County commissioners tabled a decision July 26 to accept grant funding from the Idaho Department of Parks and Recreation for an extension of the Bonner County Fairgrounds RV Campground, at the same time as Sheriff Daryl Wheeler and others have pushed against the expansion as an encroachment on county land better saved for a new justice facility. 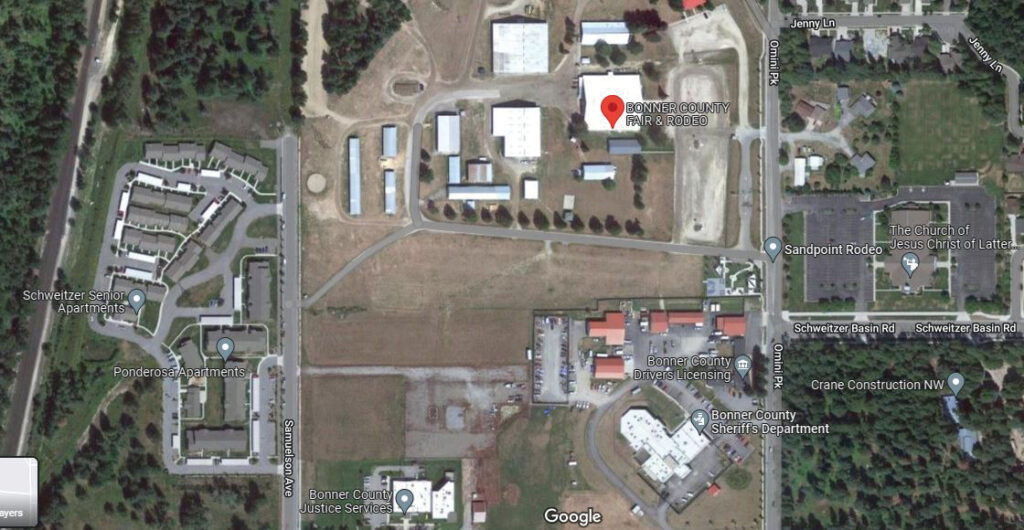 The two acres up for debate are located between the fairgrounds and the sheriff’s complex, and are currently empty but frequently used for fairgrounds event parking.

In January, commissioners gave Fair Director Darcey Smith approval to apply for a grant from IDPR meant to fund an expansion of the fairgrounds RV campground into that two-acre area. IDPR informed Bonner County it would receive $473,315 for the first phase of the expansion, and Smith brought the motion to accept that money before the board at its regular weekly meeting on July 26.

Several members of the public, along with Wheeler, used the opportunity to express concerns about using the land for the RV park, with many seeing it as prioritizing tourism over law enforcement.

“The fair is vital to our agricultural way of life in Bonner County,” Wheeler said. “The land that we have at the justice complex is essential for public safety in Bonner County.”

“These two acres will eventually be used as a parking lot for the justice complex when and if it is expanded to include a new courthouse, offices for the prosecutor and public defender, a new 911 dispatch center, expansion of the jail, records storage expansion, and general storage facilities for the sheriff’s vehicles and equipment,” he continued.

Commissioner Dan McDonald rebutted statements made by what he called “the sheriff and what appears to be his posse,” pointing out that the RV campground expansion would bring the fairgrounds closer to being financially “self-sufficient,” rather than relying so heavily on taxes.

He also noted that there are four other acres between the fairgrounds and sheriff’s complex that are currently vacant after a deal to lease the land to a nonprofit ice rink organization — which also prompted vocal pushback from the sheriff — fell through earlier this year.

“There’s also the area between the jail and the juvenile detention [center], which will nicely fit a justice facility if the voters decide they want to pass a $100 million to $150 million levy or bond to build that in the future,” he said. “I don’t see it happening soon.”

“When you start looking at the overall dynamics of this and looking at the long-range picture, this makes a heck of a lot more sense than leaving that ground fallow and having it not make any revenue,” McDonald added.

Wheeler fired back with concerns about campground residents being too close to law enforcement operations, noting that there will be “RVs parking, people barbecuing on the other side of our evidence fence” where BCSO personnel will be “collecting evidence … that were part of homicides with very violent crimes.”

“And we’ve got people just on the other side of that fence barbecuing and having their kids play,” Wheeler said.

McDonald said the neighborhood is already home to a playground and several housing developments.

“Fortunately we keep everything locked up — at least I hope — including the prisoners,” he said.

Commissioner Steve Bradshaw took particular issue with Wheeler’s statement about the proximity of evidence extraction to campers, stating: “I want to reassure everybody that my sheriff is not going to put evidence that’s used in a homicide in an open, vacant lot. I would assume and almost guarantee without reservation that that would be in an enclosed lot. It’s not like it’s sitting there where somebody can come tamper with it. That would be extremely irresponsible.”

Commissioner Jeff Connolly said he had reservations about voting to accept the grant money without first knowing whether the county could choose a different location or eventually move the RV park even after accepting the funds.

“That location is not set in stone,” Smith said. “The fair board [is] more than willing to work to see if we can wiggle it somewhere else. If we can make it viable somewhere else — yes, the engineering costs will come up — but we had that contingent in this amount when we applied.”

The commissioners ultimately tabled the decision to accept the grant money, pending more information from IDPR, and now have the motion slated for the Tuesday, Aug. 2 agenda.

“We are not trying to take things away from the sheriff,” Smith said. “We are good neighbors to them.”

The board of commissioners meets each Tuesday at the Bonner County Administration Building (1500 Highway 2 in Sandpoint) in the third floor meeting room. Meetings are also live streamed on the Bonner County YouTube channel.