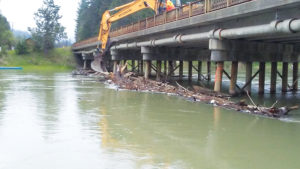 The Idaho Transportation Department uses an excavator to remove logs from beneath the Priest River Bridge on Highway 2 near town after this season’s flooding. Courtesy photo.

“There’s an unusual amount of debris in the water right now,” said Danno, a marine officer on Lake Pend Oreille in Hope. “There’s everything from very small chunks to very large trees with branches still on them.”

Danno said the spike in debris this year is due mostly to flooding. While some of the material has come from the Clark Fork River thanks to the fast runoff, he said most has been loosened from the shoreline during high water. He said he’s seen logs previously wedged into shoreline soil lifted out by the floodwaters.

Danno said his advice for boaters is to take it slow and always have a “spotter” — someone on the lookout for possible obstacles. He discouraged boating at night, but if absolutely necessary, boaters should stick to a no-wake speed.

“Sometimes it doesn’t take much,” he said. “If you hit (any debris) with speed in a fiberglass boat, it’ll knock a hole in your hull.”

Deputies on the sheriff boats are marking large debris with red stakes and yellow ribbon, and Danno said members of the public who find debris should feel free to mark it however they can so other boaters might have a chance at avoiding it.

Some of that larger debris becomes an issue not only for those who recreate on area waters, but also for local infrastructure. Idaho Department of Transportation spokesperson Megan Sausser said ITD recently dealt with debris beneath the Highway 2 bridge near Priest River by using an excavator. Up next, she said ITD will focus on dislodging jams beneath the Long Bridge in Sandpoint.

“It’s important to dislodge the logs … to ensure that the combined weight of the logs and other debris do not threaten the integrity of the structure or the safety of the traveling public,” she said.

Though Danno said floodwaters are the main source for the high debris volume, he said a breach in the Clark Fork River Delta boom system may also have something to do with the increase.

U.S. Army Corps spokesperson Scott Lawrence said the corps, which owns the Clark Fork drift yard, is working with a contractor who will make repairs as soon river flows drop and the lake reaches a safe level for maintenance.

As Lake Pend Oreille settles into summer pool and boaters prepare to cover the waters, Danno said now is the time to brush up on boat safety and etiquette.

First, he said he and other deputies across Bonner County are happy to be flagged down any time to give a boat safety inspection and discuss safe boat handling. Boaters receive an updated boat safety certification sticker free of charge after inspection. To review county boat safety laws, visit www.bonnerso.org/marine.

Danno also noted the importance of respecting lakefront property while recreating. As a reminder, the no-wake zone law across Bonner County waterways in 200 feet, but Danno said boating in the core of area lakes and rivers is always better than hugging shoreline.

“We’re asking people to be as courteous as they can while creating wake,” he said.