As the centerpiece of state’s agricultural industry, the Idaho potato is iconic.

For many Americans, it’s Idaho’s only notable characteristic, a source of annoyance for locals and tourists who have plenty of reasons to love the Gem State. Whether or not one relishes Idaho’s reputation as the land of potatoes, the vegetable remains an important pillar of the state economy — a resilient export backed by proven quality and true marketing power. 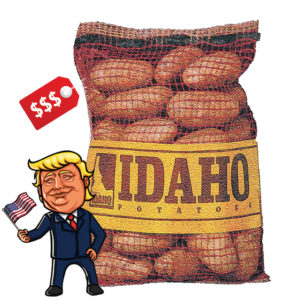 That reliability may be in question following a suite of tariffs imposed by Mexico in retaliation to President Donald Trump’s tariffs on Mexican steel and aluminum. Among the products targeted, which largely center on major exports from predominantly Republican states, are potatoes, which were hit with a 20-percent tariff. According to Idaho State Department of Agriculture spokeswoman Chanel Tewalt, those tariffs could put the Idaho potato’s quality and brand strength to the test.

“That quality is always there, and that’s why our partners come to us, but there is that cost-benefit of dealing with tariffs,” she said.

Idaho is far and away the largest potato producer in the nation. More than a third of all American potatoes are grown in Idaho, making the product essential to an agricultural industry that accounts for 20 percent of all state sales. Exports are a vital part of that market, with 20 percent of agricultural commodities shipped internationally.

It doesn’t help that the tariffs arrive at a particularly soft time for Idaho agricultural commodities. According to Tewalt, products like potatoes typically perform best when the dollar is weaker, which makes agricultural exports more competitive. The strong dollar and hot national economy have ironically had a chilling effect on agricultural exports, she said.

“(The industry) has been dealing with low commodity prices, and that can be difficult when you have trade concerns on top of it,” she said.

According to Tewalt, exports to Canada and Mexico exploded following the 1994 establishment of the North American Free Trade Agreement, or NAFTA. Exports to Mexico grew nearly 1,000 percent, while the Canadian market inflated by 290 percent. The two countries account for nearly half of Idaho’s export market — 20 percent to Mexico and 27 percent to Canada — with processed, frozen potatoes like French fries being particularly important.

Given the importance of the export market, it’s no wonder that Mexico’s imposition of tariffs last week caused a stir. Frank Muir, president and CEO of the Idaho Potato Commission, has stayed busy the past several days answering media and stakeholder inquiries in the wake of the news. Despite the swell of concern, Muir is taking a confident stance.

“I would anticipate that the high demand worldwide for the product means (the potato industry) will weather the storm,” Muir said.

Factoring into Muir’s encouraging prognosis is the fact that the tariffs almost exclusively impact frozen potatoes, which helps isolate the problem. Muir is also confident that since the processed potato market has nearly maxed out its production capacity, inventory intended for Mexico could theoretically be shifted to other international markets — Asia, for instance.

“The Idaho brand has quality imagery and premium price associated with it,” he said.

Muir added, “There’s a reason we spend such effort building this brand, and that’s to get through times like these.”

The problem there, Tewalt said, is that trade contracts don’t appear out of nowhere. They’re the result of carefully nurtured international partnerships, and that’s something the Idaho State Department of Agriculture is working hard to facilitate. In fact, the department director is in Japan this week for that very reason, Tewalt said.

“We are working very hard to preserve those relationships,” she added.

In the meantime, Muir is hopeful that the burgeoning North American trade war will resolve itself before its resulting problems are deeply felt. He said it’s the consumer who is ultimately hurt by trade wars, so the recent tariffs are bad for Mexican citizens as well as potato producers.

“Whenever countries start placing tariffs on each other, it never leads to better trade relations,” he said.

While Idaho agriculture is a famously resilient industry, that doesn’t mean it isn’t vulnerable to unfortunate shifts in the market. According to Tewalt, there is room for Idaho agriculture to grow, but that is contingent upon the state’s ability to move product. And a downturn in a major state industry is something that affects everyone.

“Whether or not you’re a farmer, you start to feel those effects, because our economy will,” she said.