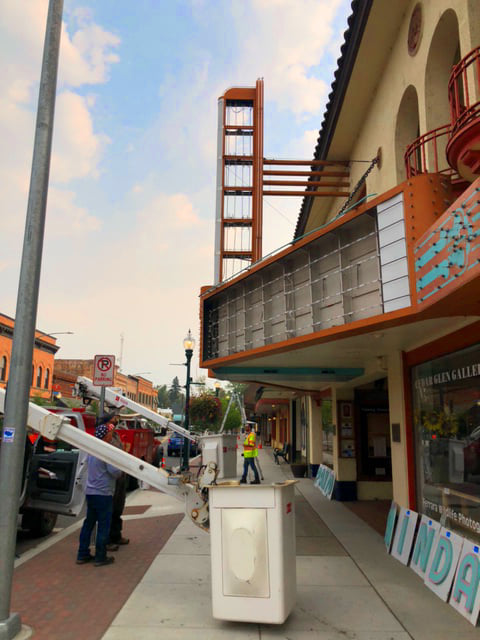 The Panida launched its “Unite to Light the Marquee” campaign in early April, vowing to find grants to match each private donation to the marquee restoration fund. Estimates placed a full bid for the work at around $53,000. On Aug. 11, board members announced that the goal had been reached and work had begun.

“The Board of the Panida Theater would like to thank the Innovia, Equinox and Confidence Foundations for their generosity as together with the support of so many others in our community they helped achieve the goal of ‘Unite to Light the Marquee,’” Panida officials stated in a media release.

New LED lighting has been installed into the marquee’s reader panels and the old neon has been removed. The YESCO sign company is hard at work bending the new neon set to grace the Panida, a project headed up by the company’s 82-year-old glass-bending expert — “one of the few capable of this art,” according to theater managers. Staff is cleaning the entire marquee structure and also doing some painting, including the original letters spelling out “Panida.”

“We look forward, after this work in progress is completed, to celebrating with the community the return of our unique antique wonder that has, for so many decades, lit both our hearts and First Avenue,” said Panida Board Chair Keely Gray.

Find the Panida Theater on Facebook, or visit panida.org, to stay current on all events happening at Sandpoint’s historic downtown theater.