Big adventure on the big screen

Let’s admit it — backcountry winter adventures are not for everyone. But watching incredible feats of exploration play out on the big screen while knowing you’re helping local youth access outdoor education opportunities? That’s pretty hard to pass up. 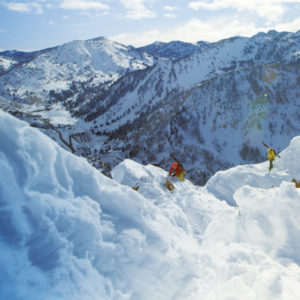 A scene from A Climb for Equality, about ski mountaineer Caroline Gleich who documented a climb of Mount Everest. Courtesy photo.

Those who attend the Backcountry Film Festival on Friday, Dec. 6 at the Panida Theater have the chance to do just that as Selkirk Outdoor Leadership and Education hosts the event in an effort to raise money for its SnowSchool Experiences program.

Produced by the Winter Wildlands Alliance, the 2019 Backcountry Film Festival premiered Oct. 25 in Boise and has since been touring all over the United States. The 10 films featured in this year’s lineup chronicle the adventures of mountaineers, skiers, rafters, splitboarders, mushers, artists and conservationists as they navigate backcountry as treacherous as it is beautiful.

As per tradition, Sandpoint’s Backcountry Film Festival will also feature raffles and silent auction items, including a custom ShotzSki, a reclaimed original Schweitzer Ski Chair, and a snowboard and helmets from 7B Boardshop. Goods from Steamboat Springs and Big Agnes will also be up for grabs.

Funds raised at the Backcountry Film Festival will go largely toward the SnowSchool Experiences program, which SOLE Executive Director Dennison Webb said is an award-winning and nationally recognized curriculum using E-STEM principles — environment, science, technology, engineering and math — to teach kids about the outdoors in their backyard.

“We partner with NASA and our students get to do real science in the field,” he said.

Webb said that over 50% of the children SOLE serves live in poverty and over 70% of those kids said the first time they learned about the Selkirk Mountain ecosystem and Greater Lake Pend Oreille Watershed was through the SnowSchool Experience program.

“With over 80% of our freshwater coming from our snowpack, we believe it is essential to provide a novel educational setting where our community’s youth can develop a sense of belonging to their wildlands,” Webb said. “Simply put, without SOLE’s SnowSchool Experience program, hundreds of rural youth in Bonner County and beyond would not have the opportunity to explore and learn about snow science, winter ecology, avalanche awareness, outdoor living, and travel skills, and develop sound conservation literacy.”

“Our board works very hard to put a great event on every year,” he said. “My favorite part would have to be watching their hard work pay off in more ways than one.”