West-side Washington comics coming to the 219

A trio of comics are coming to the 219 Lounge for a must-see show Saturday, Dec. 7. 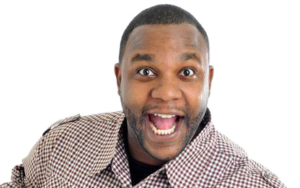 Top of the bill is Seattleite Nate Jackson, an alum of MTV improv show Wild ‘N Out and winner of the 2010 Bay Area Black Comedian Competition. What’s more, he’s opening Nate Jackson’s Super Funny Comedy Club in Tacoma in 2020, “joining the less-than-10-people-long list of black-owned comedy clubs in the country,” as he said on superfunnycomedyclub.com.

While all stand-up comedians use their voice, Jackson really works his — singing, gleefully shouting and contributing his own infectious laugh to the uproar in his audience. With material touching on black culture, regional quirks, sex and dating, his wordplay and body language combine to make Jackson a comic you want to laugh with.

Joining him will be Olympian Sam Miller, who has made a name for himself with his self-referential, self-deferential style — which, even though he often goes to dark places, touching on his recovery from drug and alcohol addiction — comes off as genuinely warm-hearted.

Miller has performed at The Washington Center for the Performing Arts and Bumbershoot, took part in the 2016 Seattle International Comedy Competition and was voted “Best Local Hero in Olympia” by his local newsweekly.

“That looks pretty good for me and super bad for Olympia,” he says in a 2017 bit.  “All I did was stop stealing people’s bikes.”

Finally, veteran road-dog comic Morgan Preston hosts the 219 show, bringing his own inimitable brand of outspoken, in-your-face humor to what’s sure to be a helluva good time.