The beauty of Idaho is tough to put into words, let alone capture on canvas, but Boise-based landscape painter Carl Rowe has made his career doing just that. 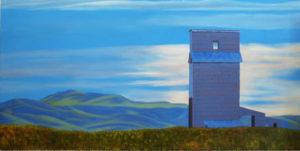 One of Rowe’s paintings: “Out Standing in its Field.” Courtesy image.

His work, which has spanned 24 years and earned him some of the highest artistic honors in the state, is simultaneously ethereal and abstract while capturing the rich solidity of the Gem State’s natural places.

Rare among landscape artists, Rowe manages to go beyond the representation of the land to convey the warmth of high desert plains and rolling, rock-studded hills as they play with cool purple-hued hollows and lush stream sides — not only communicating the spell-binding effect of light and form, but evoking the sense of quiet mystery that anyone who has traveled through Idaho has felt in the presence of these places.

According to the Boise Open Studio Collective Organization, which counts among its members some of the finest Idaho artists from a multitude of media, Rowe’s work has been honored with the Governor’s Award for Excellence in The Arts, the Mayor’s Award for Excellence in The Arts and the Culture and Conservation Award by the Land Trust of the Treasure Valley. His pieces hang in more than 550 public and private spaces, including in the city of Boise’s Chronicle Collection and the home of former Idaho Gov. Phil Batt.

Hosted by the Idaho Conservation League and Pend Oreille Arts Council, the exhibition highlights Rowe as the 2019 ICL artist in residence — an honor that has sent him on a statewide tour sharing his body of work, which tells a visually stunning story of Idaho’s many-faceted land in ways utterly unique to his vision.

The show also doubles as ICL’s holiday celebration, set for Thursday, Dec. 12 from 5:30 to 8:30 p.m. Hear a recap of the organization’s accomplishments over the year, get clued into what’s happening with ICL now and in the future, and enjoy appetizers and drinks while Rowe shares stories from his travels around the state.