‘Art is in everything’

Danielle Capelli, originally of Sandpoint, will leave the University of Idaho in a few months with knowledge, memories and hopefully a degree. But she’ll also leave something behind: a mural.

Capelli recently won the UI Gateway Murals contest when her design, titled “Deep,” was chosen to be painted on the campus’ East Art and Architecture building, which faces into downtown Moscow. 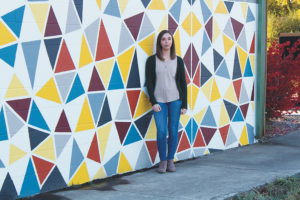 University of Idaho student and Sandpoint graduate Danielle Capelli stands before her winning mural painted on the East Art and Architecture building on the Moscow campus. Photo by Diamond Koloski of The Argonaut.

“That mural could have been done by anyone,” she said. “UI is great place where it doesn’t matter who you are or what you do … the point is what you can do.”

Capelli is an aspiring teacher, and credits her interest to the teachers she had while growing up in Sandpoint, namely her high school choir teacher, Jon Brownell, and art teacher, Heather Guthrie.

“I had those teachers in my life that influenced my passions in these different types of arts, so I want to be that in the future,” Capelli said. “I want to help my students find their passions just like I did.”

She graduated from SHS in 2014 and is now at UI studying Secondary Art Education. She said she will receive her degree after fulfilling her student teaching requirement in fall of 2018.

“I’m lucky to have come from a high school that had a pretty stable arts program,” she said. “I’m just really, really grateful for that because others don’t have that opportunity — that’s why I became a teacher.”

According to Capelli, people are influenced by art everywhere, even when they don’t notice.

“There’s a lot of murals going up (in Moscow), and I love that type of thing because it really influences people in the community even if they don’t recognize it,” she said. “Art is in everything: movies, magazines, cars. My main goal is to encourage people to see how influential art really is.”

Leading up to the mural contest, Capelli said her sculpture instructor Casey Doyle encouraged her and her classmates to submit designs. She said thanks to him, she got involved in the project.

Doyle, interim head of the university’s art and design program, said he put together the grant to make the murals happen and that the goal was to find designs that would engage the university with the outside community. He said Capelli’s design, voted on by members of the College of Art and Architecture as well as the general public, fit the bill.

“She’s a very promising student and we look forward to seeing her out there teaching, and potentially educating students that might end up in our program here,” he said.