Cooking is a chemistry class in which you get to eat your grade at the end. Most of us know how to cook food, but the actual science behind the preparation of food is surprisingly not very well understood by the masses. In fact, nutritional and food sciences are so poorly understood by the general public that people have built an industry on ineffective fad diets that milk more than $70 billion a year from unsuspecting Americans. These diets profiteer from the same tactics used by fake news outlets: exploiting peoples’ ignorance of a subject, providing false details “no one else knows” and spreading it through unofficial outlets, such as your family members’ social media feeds. People are more likely to spread information without questioning its source when it comes from a family member than if it comes from an official source.

Always question information. Question this article. In a crusade to prove me wrong and find where I may have gathered misinformation, you may have learned something new in the process.01 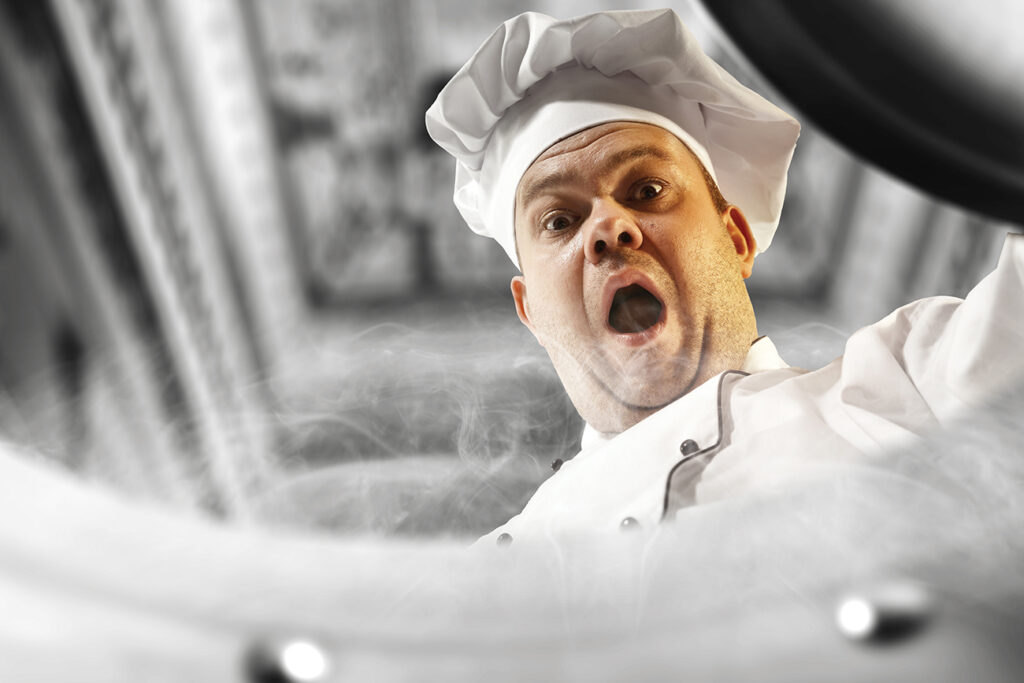 Back to the topic at hand: cooking.

We have found archaeological evidence of humans cooking food as far back as 2 million years ago. Cooking food provides two major benefits: heating the food sterilizes bacteria in the food and it makes it more palatable. Our ancestors had no concept of a microbiome when they first started cooking meat; they likely just started doing it because cooked meat tastes better than raw flesh. However, eating cooked food began to alter the early human gut.

Meat undergoes key changes when heat is applied to it. As I mentioned, a sustained temperature of 165 degrees Fahrenheit kills living bacteria on and inside of the meat — which is especially important for ground meat like hamburger or sausage. The heat also makes the water bound to the proteins in the meat to evaporate, which causes the proteins to coagulate. This process gives cooked meat a distinct brown color and a delicious taste.

“But Brenden,” you may interject, “what about rare steak? It’s still pink in the middle.”

That’s true. In the case of rare steak, this process has occurred on the outside of the steak, but not the interior. If you’re wondering why you can do this with beef, but not chicken or pork, that is because of the density of the meat. Beef is considerably denser than chicken, which means bacteria and parasites have a more difficult time penetrating the interior of the meat. That’s why chicken sashimi is something you don’t see on restaurant menus.

It may disappoint my food idol, Ron Swanson, but this is an article about cooking all food, not just meat. The process that happens when cooking vegetables is markedly different from cooking meat. Applying heat to your vegetables breaks down the cell walls of the given plant, which spills the nutrients within the cell. This process makes it easier for the bacteria in our guts to digest and pass them on to the rest of our body. It also softens the vegetables’ flesh and makes it easier for us to chew.

Over the eons, we’ve discovered myriad ways to cook our food. Cooking over open flame is the oldest method, but it’s also the least efficient method at our disposal today — aside from trying to cook on hot asphalt, that is.

In order to make sure we get an even cook on our food, we need to enclose it. When you have heat focused into a relatively small area where only small amounts of it can escape, it will more quickly cook your food. This is just as true for your electric or gas oven as it is for your microwave oven.

The key differences between these two ovens is the method in which they use radiation to cook your food. An electric oven operates similarly to a large incandescent light bulb (think of those old-timey rounded light bulbs that get hot), with a large curved band of metal inside that is a resistor to electrical current.

When an electrical current runs through this resistor, it creates heat energy, thus, radiation which goes on to heat your food. An electric oven will periodically run energy through the resistor, then cut the current to evenly heat the oven based on the internal thermometer to which it is set. This is actually a very interesting and expansive subject we’ll explore in another article in the future.

The way a microwave oven works is by producing focused microwaves that agitate the molecules of whatever is placed inside, causing them to rotate and create thermal energy, which will cook organic substances placed inside of the microwave. The dish rotates inside to keep an even cook on whatever it is you stick in the microwave.

If you’re wondering why metal objects such as spoons left inside of a microwave will spark and ignite, that is because the metal is acting as an antenna and will begin conducting electrical current, which creates heat energy. By placing a metal object in a microwave, you’re turning your microwave oven into a convection oven that has no internal thermometer to control it, which will cause serious damage to your microwave, your food and probably kick the circuit breaker in response.

I cannot stress this enough: Don’t do this at home. Watch it on YouTube if you’re that curious about it.