The Kinnikinnick Native Plant Society unveiled a plaque and officially dedicated a new arbor July 21 at a small ceremony.

The arbor was donated by Collin Beggs, who built it with his crew at Collin Beggs Design Build Timber Framing.

“I was just asking about material and advice on how we could build it,” Johnson told the Reader. “Collin just said, ‘I could just build it for you.’ So he did.”

Beggs — along with his crew members Mike Austin, Dave Brown, David deLeeuw and Brandon Mimbs — constructed the arbor out of white oak, black walnut and cedar. All materials and labor were donated by Beggs and crew. 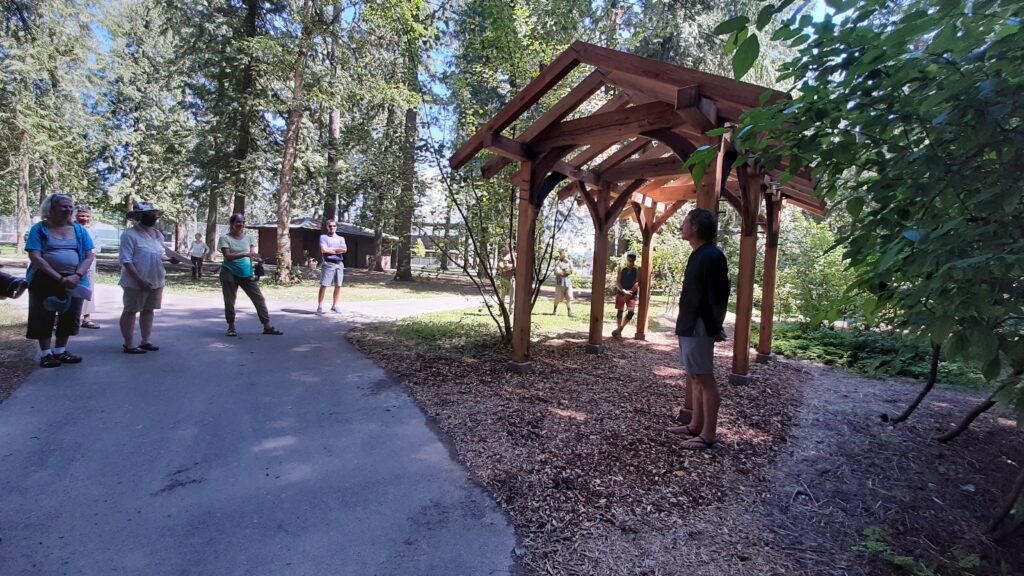 Collin Beggs stands before the arbor he and his crew built and donated to the Kinnikinnick Native Plant Society at Lakeview Park. Photo by Ben Olson.

“I had no idea we were going to get a piece of art,” said Ken Thacker, KNPS president. “This thing is going to be here for decades. We’re thrilled.”

Sandpoint Mayor Shelby Rognstad was also on hand for the unveiling of a plaque donated by Ann Torpie.

“Thanks to Collin and his team for their many contributions to this community,” Rognstad said. “This place is gorgeous. It’s really a tranquil place that you’ve created here.”

“The built environment has a huge impact on people’s sense of place and belonging,” Beggs told the gathering. “I’m here for the long haul. When I create something in the built environment, I want people to be uplifted by it. I want to help shape this community in the direction we want it to go.”

The arboretum at Lakeview Park was first proposed by Lois Wythe and the KNPS board in 1998. Today, the arboretum comprises eight habitats found in North Idaho with appropriate plants in each habitat. KNPS works with the city of Sandpoint, which provides major maintenance for the area, such as removing fallen trees, trash collection and providing water.

To view the arbor and plaque for yourself, head to Lakeview Park. The arbor is located west of Memorial Field next to the pavilion.