Another day at the office

experienced: seated on the bow of a double-decker boat with a cold huckleberry cream ale in hand, the Green Monarch Mountains stretched to the right and the Scotchman Peaks towering on the left — everything drenched in autumn sun and feeling, if only for as long as it takes to get from Ellisport Bay to the Clark Fork Delta, absolutely perfect. 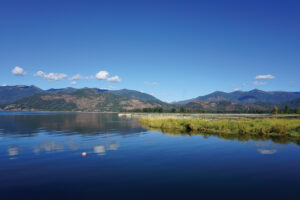 The view looking toward Hope as the Shawnodese enters the Clark Fork Delta. Scotchman Peak, the tallest peak in Bonner County, is visible on the far right. Photo by Lyndsie Kiebert.

The vessel departed Kramer’s Marina at 12:30 p.m. destined for a tour of the delta — a three-hour trip that’s just one of a trio of tours that Lake Pend Oreille Cruises offers in the fall.

Linda Mitchell has been part of Lake Pend Oreille Cruises for 25 years — an adventure that launched when her husband, Curtis Pearson, spotted a retired San Diego ferry boat on the Pend Oreille River. The couple bought it and Curtis got to work stripping it down to the aluminum.

“He knew that that hull would be really great for Lake Pend Oreille,” Mitchell said. “You know, this lake can really pack a wallop.”

The boat — dubbed the “Shawnodese,” a Native American word meaning “Spirit Keeper of the South” — took two years to restore and saw its maiden voyage on Lake Pend Oreille in October 1995. Pearson and Mitchell hosted private and public charters together until Pearson retired a decade ago. Mitchell then manned the Shawnodese with a cast of different captains until two years ago, when Eric Jensen — now known as Captain E.J. — purchased the business. 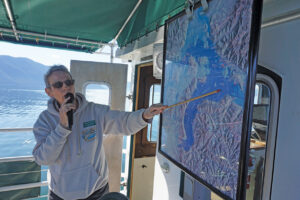 Mitchell remains on the crew as first mate and lead historian, along with two other regular crew members.

Even more than the spectacular views of the cliffs along the Clark Fork Delta or the bird life spotted along the way, Mitchell’s succinct and passionate history lesson steals the show on each cruise. With wooden pointer in hand and a relaxed, confident cadence in her speech, Mitchell’s story begins thousands of years ago, as the glacial floods shaped the steep mountainsides and gaping water features surrounding the passengers upon the Shawnodese. Her story finds its way to explorer David Thompson, who established the first trading post in Hope, and eventually to the formation of the railroad and Bonner County’s modern towns. She shares her knowledge of the local wildlife and answers questions from passengers, all while keeping perfect balance as the boat rocks lightly on the waves — Mitchell’s sea legs are well established, as is her understanding of the lake she loves.

“It never, ever tires me,” Mitchell said while watching the Green Monarchs drift by through the parlor windows. “It’s just so beautiful, and every day is totally different.” 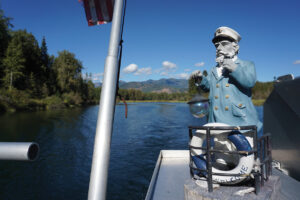 A captain figurine surveys the waters of the Clark Fork Delta. Photo by Lyndsie Kiebert.

A trip up to the captain’s quarters just before docking at Kramer’s Marina confirmed that Mitchell’s love of the lake is safe with the next generation. Jensen, a man of few words, kept his eyes on the water as he shared what inspires him to get out of bed every day and board the Shawnodese.

“I mean, look at my office,” he said, making a sweeping gesture toward the Cabinet Mountains, the sun soaked marina and the expanse of shimmering blue connecting it all. “It speaks for itself.” 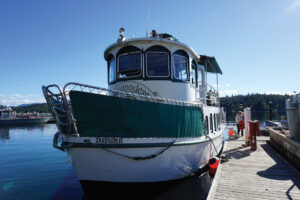 The Shawnodese docks at Kramer’s Marina. Photo by Lyndsie Kiebert.