The folks at local theater company Unknown Locals are at it again, and this time, they’re going in blind. 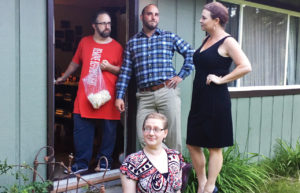 “Blind Panic,” the latest play by writer and director Chris Herron, opens this weekend at the Heartwood Center. Firmly established as one of the leading creative voices in local theater, Herron focuses this time around on a comedy about social anxieties — and the lengths misguided friends will go to help.

The play has a simple premise that quickly spirals into comedic farce. The main character, Tim, has become overly reclusive due to his social anxieties, so his friends figure the solution is to set him up on a blind date. One problem: In order to make him attend the date, they essentially “reverse kidnap” him. It only gets crazier from there.

For Herron, who has developed a reputation for tackling serious themes with a light comedic touch, it’s a deeply personal play. Social anxiety is something he has struggled with most of his life.

“Part of that process (of dealing with my social anxiety) has been writing ‘Blind Panic’ and using the play to purge and examine those issues,” Herron said. “But, as is always the case, I wanted it to be a funny show more than anything.”

Herron wrote “Blind Panic” over the course of a year beginning in spring 2017. Once Unknown Locals wrapped up its previous projects, attention turned to producing “Blind Panic” for the stage. The first step was casting, and Unknown Locals found some comedy veterans just right for the task.

“The goal is always to get people who will bring a lot of ideas and humor to their role,” said Herron. “After working with (Steve and Wesleigh Hammond) in ‘Death of a Small Town in the West,’ I knew that they were the epitome of ideas and humor. Mike Clarke is always hilarious and (Maddie Elliott Herron) is my favorite actress.”

“Blind Panic” is just the start of an exciting time for Unknown Locals, which has produced plays at a steady clip of the past four years. Later this year, they will collaboarate with the Panida Theater to produce a series of one-act holiday plays. Auditions for the project will take place Aug. 27 and 29, with the show taking place in November. Next comes Herron’s “pre-post-apocalyptic comedy” “First Wave,” to hopefully be produced in the spring. A much bigger musical project still under wraps may come through for 2020. And late this year or next year, Herron’s first original play “Quick Exit” is slated to be published.

“We are really grateful that we’ve been able to do this in Sandpoint for the last four years, especially considering we produce so many originals,” Herron said. “We feel very fortunate that the community supports us the way they do and just hope that we can continue to bring a variety of theater to the area.”

Catch “Blind Panic” Aug. 17, 18, 24 and 25 at the Heartwood Center. Doors open at 7 p.m., and the performance starts at 7:30 p.m. Tickets are $12 for general audiences and $10 for seniors and are available at Eve’s Leaves, La Chic Boutique and at the door. The play features adult language, so viewer discretion is advised.