An Interview with Lake Street Dive

This week, as part of our ongoing interview series with the Festival at Sandpoint’s artists, we caught up with Lake Street Dive, who Rolling Stone has called “This year’s best new band.”

I spoke with Kearney on the telephone about life on the road, the big 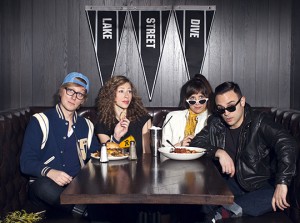 breaks and her fallback profession selling foam fingers for the Red Sox.

Ben Olson: OK, where did you guys get your name?

Bridget Kearney: Our guitar / trumpet player, Mike “McDuck” Olson is from Minneapolis, Minnesota. and Lake Street there is kind of the main drag where all the cool rock clubs and bars are at. Growing up, he had aspirations to have the kind of band that would play in one of these dive bars on lake street. So there you go.

One of the things I like about your band is that it’s hard to classify exactly what genre it is.

We’re always just kind of following our ears. Whatever we’re excited about in the moment, that’s what we’ll be writing and working on playing. It’s nice that we’ve been able to establish ourselves as a band that is relatively free of genre pigeon holing, that leaves us free to keep growing and keep trying thing … It’s exciting for us, at this stage, when we’ve been a band for 11 years to keep trying new stuff and keep it fresh.

Do you write together? How does the creative process go?

We generally write separate from one another. A band member will come in with the form of a song, the chorus, the melody, the lyrics, all that stuff ready to go, and then we’ll figure out how we’re going to arrange it. What groove we’ll apply to it, how the parts are going to fit together. Occasionally, we’ll collaborate on lyrics together.

You guys all come from a jazz background? Has that constrained you in ways, or opened you up to step outside of the box with the music you’re writing now?

I think learning jazz just gives you a really good foundation in musical building blocks. To be able to improvise, you have to understand what each part of the music is composed by, what the composition of that chord is, what notes are good within that, what are interesting weird notes you can use, and how one chord moves from the next. Having that foundation, we definitely use all those jazz skills when we’re writing, and the way that we play is usually pretty improvisational too. We’ll have a starting point, but if you were to write out what Mike played on a drums on a certain song from night to night, there would usually be a lot of differences. That’s a result of us being, at our core, improvisers.

Who are some of your main influences have been, growing up and forming a band that plays regularly?

Definitely the Beatles are something that we come back to constantly. Man, how is everything so good? All the pieces of the puzzle are just so perfect with them; the bass line is memorable, every guitar part contributes to the song, they just have a succession of albums that are all different from one another. That’s what we’re trying to do too, is just keep pushing forward and discovering new stuff we can do with each album. We’re into a lot of other stuff, too… a lot of Motown and soul elements also.

I hear that in Rachael’s voice a lot.

Otis Redding and Sam Cooke are some of her biggest singing influences.

You had a big lurch of success last year at the Town Hall show in NY, when you played with Elvis Costello, Avett Brothers, Jack White, and a huge lineup. The press blew up after that. Was that a pivotal moment for your band?

It definitely was. We keep hearing from people that are like, “We saw you at the Town Hall Show.” That was a funny experience for us; we were so happy to be included in the event at all, and in awe of all the other artists that were around, meeting them and being in the backstage area with them, we neglected to think about what a great exposure the event was for us. We were preoccupied with the backstage and didn’t think about the house and the fact that Rolling Stone magazine and New York Times were there.

You were probably just geeking out on the fact that you were hanging out with Elvis Costello.

Did you have an early start to music?

It was definitely in my life from an early age. I grew up singing in church choir, and taking piano lessons, and then I started the bass in fourth grade. It was pretty early. That’s the case for all four of us. Mike Olson’s dad is a band director, so he had a horn in his hands when he was learning to walk. Rachael’s father is a choir conductor, she grew up singing super early. And Mike’s parents are musicians as well, so we’ve all been entrenched from a very young age.

What was life like before you were a touring musician? What did you do for work?

We all played in different bands here and there, and I never really had a super proper job. I always pieced it together with freelancing stuff. In college, I sold foam fingers for the Boston Red Sox, so that’s my best job ever. I can always fall back on that if things don’t work out.

Lake Street Dive is playing the Festival at Sandpoint on Thursday, August 13 with the Ballroom Thieves. Check out their music at www.lakestreetdive.com.