A story of resilience

For local Jews, Hanukkah is a light in dark times

For years, it was suffused into the rhythms of everyday life. Even as she witnessed events like the rise and fall of the Aryan Nations in the 1990s — which provoked justified alarm among regional minority groups — she never feared for her safety. White supremacists were a social blight, she thought, but one that would be remedied in time. 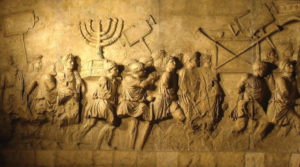 A bas-relief depicting the Maccabean revolt located at the Arch of Titus in Rome. Courtesy photo.

Twenty years later, Weissman is worried. October marked the one-year anniversary of the Tree of Life synagogue shooting that killed 11 people. The past several years have seen a rise in anti-Semitic incidents both nationally and regionally. Vandals painted swastikas in the Spokane area and Sandpoint has its own troubling history, with fliers and robocalls spreading racist and anti-Semitic tropes.

The grim realities of the modern world put the celebration of Hanukkah, unfolding this year from Sunday, Dec. 22 to Monday, Dec. 30, in a new light. But the story of Hanukkah is ultimately one of resilience — of standing against oppression to preserve the fundamental character of Jewish identity. That’s also the story of Sandpoint’s small local Jewish community, which has established its own place despite the lack of a synagogue and episodes like the Aryan Nations and white supremacist propaganda campaigns.

It’s an especially relevant story in light of the upcoming Hanukkah holiday. Hanukkah is a celebration of the Jewish temple’s rededication in the midst of the Maccabean revolt against the Greek Seleucid Empire. It is a story of resistance in the face of religious and cultural oppression, and one that ended in victory before the Romans absorbed Palestine into their empire.

The Sandpoint Jewish community is similarly resolute in its practice of the faith through good times and bad. Weissman remembers the late Barbara Veraniam as an organizing force for the local Jewish community, more than 25 years ago. Weissman met Veraniam, a school teacher at Northside Elementary whose contributions to the community are memorialized in the City Beach benches, in 1992 while the Aryan Nations led by the late-Richard Butler was still entrenched in its Hayden compound. The question of how open to be about one’s Jewish identity was under debate even then.

“She and I would go ’round and ’round about how public to be,” Weissman said. “She was teaching in Northside Elementary School and got death threats [when she taught in the ’70s and ’80s].”

Those early days had their share of fraught moments, Weissman recalled. The most nerve-wracking moment for her was a Human Rights Task Force meeting that was picketed by neo-Nazis.

“The saddest thought that crossed my mind then were the little kids that were with them, who were getting brainwashed before they even knew what was going on,” Weissman said. “They were really young, some of those kids, and here they’re being taught hate at such an early age.”

Despite the adversity, Veraniam was instrumental in organizing the local Jewish community. She established a Jewish women’s brunch, which was later supplemented by many Jewish men. The meetings established a connection between Jewish residents that grew as more began attending.

Brunches are one thing, but religious and cultural communities need a place to meet, to observe holidays and to form bonds. That wasn’t easy without a synagogue in Sandpoint. Fortunately, the First Presbyterian Church offered its building as a home for local Jewish practice. For nearly three decades, Sandpoint Jews have met at the church for Passover, Hanukkah and other celebrations.

It’s an arrangement that predates First Presbyterian Church Pastor Andy Kennaly’s years as head of the church, but it’s one he is happy to continue. He sees the interfaith relationship as essential to the good practice of his own religion.

“I see it as a partnership,” he said. “It’s kind of multifaceted. Part of it is social justice in an area that needs inclusiveness and welcoming. Part of it is hospitality — it’s an issue of Christian identity.”

“I’m not sure how it started, but at one point, they put us on their insurance policy as a continuing renter of the building,” Weissman said. “It feels good to be umbrellaed like that.”

The local Jewish community varies in the degree to which each individual observes the religion. They come from different theological denominations, the largest of which are Reform, Conservative and Orthodox Judaism. But they are united in their commitment to the practices and traditions that define the faith.

“I talked to a rabbi once, and the question was, ‘How do you describe Judaism?’ And the answer was, ‘There are as many views of Judaism as there are Jews,’” Weissman said.

Reflected in those shared traditions are themes of endurance, of perseverance, of a commitment to the foundations of the faith. Some of the most important holidays in the Jewish calendar, from Passover to Hanukkah to Purim, are directly concerned with the survival of the Jewish people in the face of steep odds and tyrannical opposition. While Weissman is discouraged by the signs of rising anti-Semitism around the world, she takes comfort in the timeless themes expressed in those holidays.