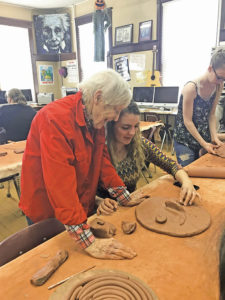 “It’s not easier. It’s not dumbed down. It’s just a different approach. It’s about trying to be a little more flexible,” she said. “My goal is to give them the belief that they can do something and the courage to go do it.”

Another goal, she said, is to make sure their high school education doesn’t just fulfill credit requirements, but instead provides them skills for life. For instance, her forestry class learns the same skills she learned from the U.S. Forest Service when she worked in the industry.

“I think that we live in a very beautiful place but we’re not always aware of our surroundings, so (forestry class is about) just having that awareness, but then also gaining some skills you could turn into a summer job or a career,” she said.

It’s a theme seen throughout LPOHS’s curriculum: learn in class, then apply that knowledge elsewhere — sometimes, even, to the benefit of the community. Culinary teacher Rand Rosecrans takes that mission seriously throughout his courses.

Rosecrans teaches media and internet literacy in his Teen Living class. He teaches students to grow every element of a pizza from scratch. He said his belief in self-reliance and societal contribution drives his lessons.

“We have an opportunity, at this school, to help these kids be productive,” he said. “If I can teach them how to make cider, and grow their own garden and make pasta, and how to shop and feed a family on $10, then that’s a success to me.”

Tibbetts said she came to LPOHS to get away from bullying that plagued her previous academic career. She said the close-knit alternative school was exactly what she needed.

“Yeah, we’ll have (hard) times, but every family has problems,” she said, referring not to her home life, but to school. “It’s nice to know that everyone’s here to learn, and help each other.”

LPOHS students can often be found at the Food Bank working in the garden, landscaping at the senior center, or doing any other number of community service acts. But sometimes, the community comes to them.

Leata Judd is an 88-year-old artist who said her “reason to get out of bed every morning” is to attend Randy Wilhelm’s art class at the end of each school day. Her presence in the classroom creates an eclectic peace that only a 70-year age gap can.

She said she loves the alternative environment because she sees it as a refuge for kids who didn’t excel in “regular” schools for any given reason. She said she wishes she could have attended LPOHS as a teen.

“See, they think about me,” she said with a smile. “They open doors for me, and when I see them down the street, they yell ‘hi’ to me. I think they’re neat kids.”