‘They’ll always be your kids’

When Jan Riley began the 2016-2017 school year teaching in a multi-aged classroom of first, second and third graders at Hope Elementary, she’d done what few teachers can say they’ve ever done. 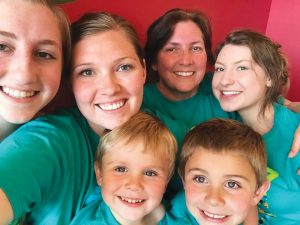 During her 34 years in the Lake Pend Oreille School District, Riley taught every grade from kindergarten through eighth.

Riley, originally Jan McNall, grew up on Grouse Creek—a property her family has occupied for almost 100 years. She attended Northside Elementary and graduated from Sandpoint High School in 1979. She said her father and aunt were both teachers, and she loved kids, so the decision to study teaching wasn’t a hard one.

“The greatest part is when you see a kid who works really hard to reach their goals, and you get to share in their pride,” she said. “It’s heartwarming.”

Riley said her favorite memories include cooking with her students, as well as teaching the Native American unit during her time with second grade. Students made dioramas of Native American life, read Native American stories, made rattles and drums, and even performed plays for their parents during the final day of the unit while everyone ate fry bread.

Regardless of all the good memories, Riley said it’s undeniable that kids have changed since her first days as a teacher. She said the rise in technology makes kids feel the need to be constantly entertained, and the respect isn’t quite where it was at when she started teaching. She also said it’s hard to see former students fall into bad situations, especially in such a small community.

However, she said the negative is bearable when she sees former students excel later in life. One student, Megan Roberts, recently visited Riley’s classroom to tell the kids about her career in marine biology—a job that takes her all over the world.

“In second grade she wanted to be a marine biologist,” Riley said with a laugh. “It’s neat to see how successful our little kids become.”

After so much time teaching in small area, Riley said she has had the privilege to teach the children of former students—as well as all three of her own daughters.

Riley’s daughter Tasha Albertson will begin teaching sixth grade at Northside starting the 2017-2018 school year — a position her grandfather held for many years.

“(My mom’s) heart is so big for every kid,” Albertson said. “She will do anything, and work so hard and so long. She always has the best ideas — no matter what the kid needs, whether it’s academic or even just needing love.”

As Albertson looks forward to teaching her own students in the fall, she hopes she can take what she’s learned from her mom into her career.

“That is what I’d want to (emulate) the most — just her heart and her passion and her dedication,” she said.

Riley said her daughter will be great with Northside’s sixth graders.

Though Riley will be taking some time away from the classroom post-retirement to spend time with her grandsons and aging father, she said she plans to volunteer in the school when the time comes.