Beer has a $1.2 billion economic impact on Idaho

The results are in: not only is beer fun to drink, it has made a “hopping” impression on Idaho’s economy (sorry, I couldn’t resist).

According to a recent report released by the Beer Institute and National Beer Wholesalers Association, the beer industry has made a $1.2 billion economic impact statewide. 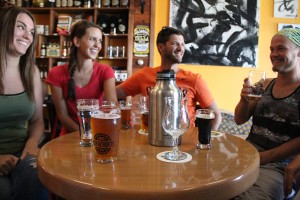 A table of friends enjoy some brews at Sandpoint’s Idaho Pour Authority. Photo by Ben Olson.

The report further states that over $556 million has been attributed to our congressional District One alone.

The data in the report is based on a 2014 study by economics firm John Dunham & Associates, using data collected from private companies as well as a number of tax bureaus.

In District One, the report states that brewing supports around 2,500 jobs, including wholesaling and retailing. The statewide figure is roughly double that. Beer brewing alone supports 278 jobs in Idaho, adding up to around $10 million in wages.

For local craft beer owner Jon Hagadone, who opened Idaho Pour Authority in May 2013, the information doesn’t come as a surprise.

“Beer is huge right now,” he said. “I would’ve been surprised a couple years ago, but not now.”

Hagadone said that microbreweries are expanding like crazy. At his shop, he usually has a dozen taps flowing, with anywhere between 300-325 different varieties of beer, plus cider and wine. The specialty beer shop employs half a dozen people.

For Mack Deibel, who calls himself “Director of Beer Enthusiasm” for MickDuff’s Brewing Company in Sandpoint, beer helps put towns on the map for tourism.

“When people visit a town and hear there is a brewery there, they always want to go check it out,” he said. “It’s all about supporting small business, and most breweries are small businesses.”

Deibel said he has enjoyed watching the evolution of the beer industry in the nine years MickDuff’s has been in operation.

“When we started, people were into microbrews, of course,” he said, “but not everyone was a fan. What we’re seeing now that people are supporting local breweries, whether it’s MickDuff’s or Laughing Dog, they are excited to buy local and drink local.”

The nationwide figures are even more impressive. Beer brewing supports almost 50,000 jobs nationwide, and when you factor the wholesalers, retailers, and indirect suppliers, the total nationwide economic impact is $253 billion.

So, next time you hoist a few with your friends, you can pat yourself on the back for supporting your state economy in the coolest way you know how.