All roads lead to pizza

Powderhound Pizza is back.

The beloved pizza restaurant and locals’ hangout has been absent from downtown Sandpoint since February 2019 when a fire claimed two buildings and a half dozen businesses, only serving their famous pies at the location on top of Schweitzer Mountain during the ski season. 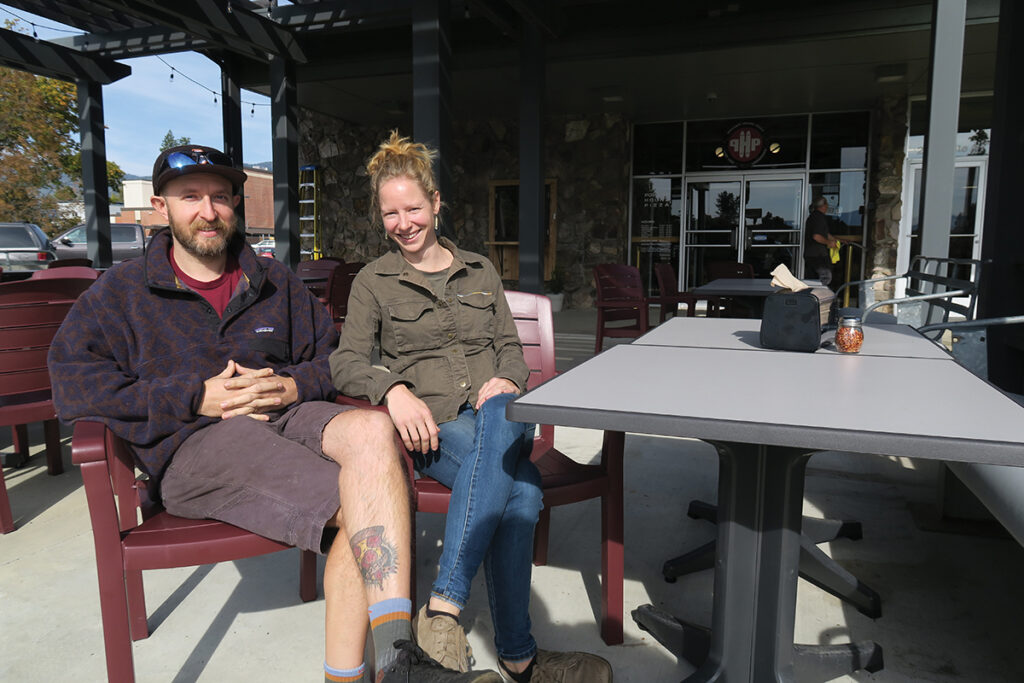 Powderhound Pizza owners Ben and Jeannie Higgs test out the patio in front of their new location. Photo by Ben Olson.

Owners Ben and Jeannie Higgs said they are happy to be slinging pizzas again, and they’re excited about their new location.

Powderhound Pizza is now located at 201 E. Superior St. in the old First Interstate Bank building next to Verizon. Both see potential in their new spot.

“We were hoping to be part of the whole rebuild process [at the former location located at Bridge Street and First Avenue], but the project took longer than we would have ever foreseen, so we started exploring other options,” Jeannie said. “When we found this location, it felt right once we looked at more of the pros with parking and outside seating. We’re walking distance from the marina, so boat-up orders are still a thing, and we’re the first place tourists see when they come off the Long Bridge, but also we’re super convenient for the locals. Even coming from Ponderay it’s super easy to get here — just hop off the bypass.”

The menu will remain mostly unchanged, with a few minor tweaks. Powderhound will still offer its classic and specialty pizzas, wings, soups, salads and more. The only items that didn’t make the new menu are sandwiches, which have been discontinued.

Powderhound will be open seven days a week, with Takeout Tuesdays offering just walk-up and carryout orders from 3-9 p.m. Sundays will be open from 10 a.m.-9 p.m., and all other days the hours will be 11 a.m.-9 p.m. Powderhound has the NFL Sunday Ticket offering a multitude of football games, and starting in mid-October will be offering all NHL hockey games, too — the only spot in Sandpoint to offer that, Ben said.

For the Higgs’, who also own Idaho Pour Authority downtown and the Powderhound Pizza atop Schweitzer, it was nice to have some time off after the fire, but they are happy to be back doing what they love.

“It’s been a blessing, but frustrating,” Ben said.

“We were in limbo so long, thinking we were going to be in that spot [by Bridge Street and First Avenue], said Jeannie. “There were a lot of iterations of what that space and reopening was going to look like.”

The new location took about three months to renovate, starting with a blank slate in July. 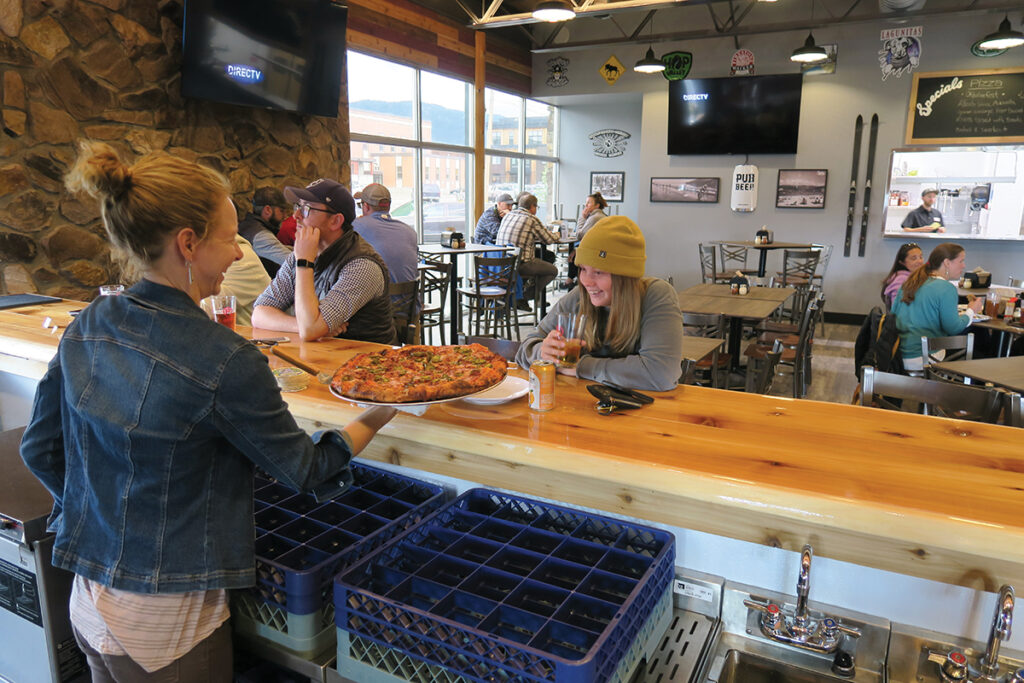 Jeannie Higgs serves a pizza inside the restaurant. Photo by Ben Olson.

“We had to gut it down to barely anything and start from there,” Ben said.

The restaurant is now a comfortable, clean space with an ample hardwood seating area indoors, as well as an outdoor patio that catches the afternoon sun. A handmade cedar bar top and bench seat were made with the help of their parents, and the new kitchen is twice as big as its predecessor.

Along with its food offerings, Powderhound has eight rotating beer taps, a rotating list of red and white wines, ciders, seltzers, canned cocktails, kombucha and the usual assortment of nonalcoholic drinks.

The Higgs’ also brought back Wingsday Wednesday, the weekly special that gets you 10 wings for $10 or six wings and a beer for $10.

“We ask that you be patient with us while we train our new staff,” Ben said. “We’re a popular place and we do get busy. We’re still on the hunt for a few more employees, too.”

Looking over the work they did to renovate the space, the Higgs’ were eager to begin the new chapter at this new location.

“I think the thing we most enjoy is being so involved and being part of a community,” Jeannie said. “We love providing fun spaces where people can enjoy good food and drinks.”

Powderhound Pizza is located at 201 E. Superior St. next to the Verizon store by the Long Bridge. Check out their menu at powderhoundpizza.com. 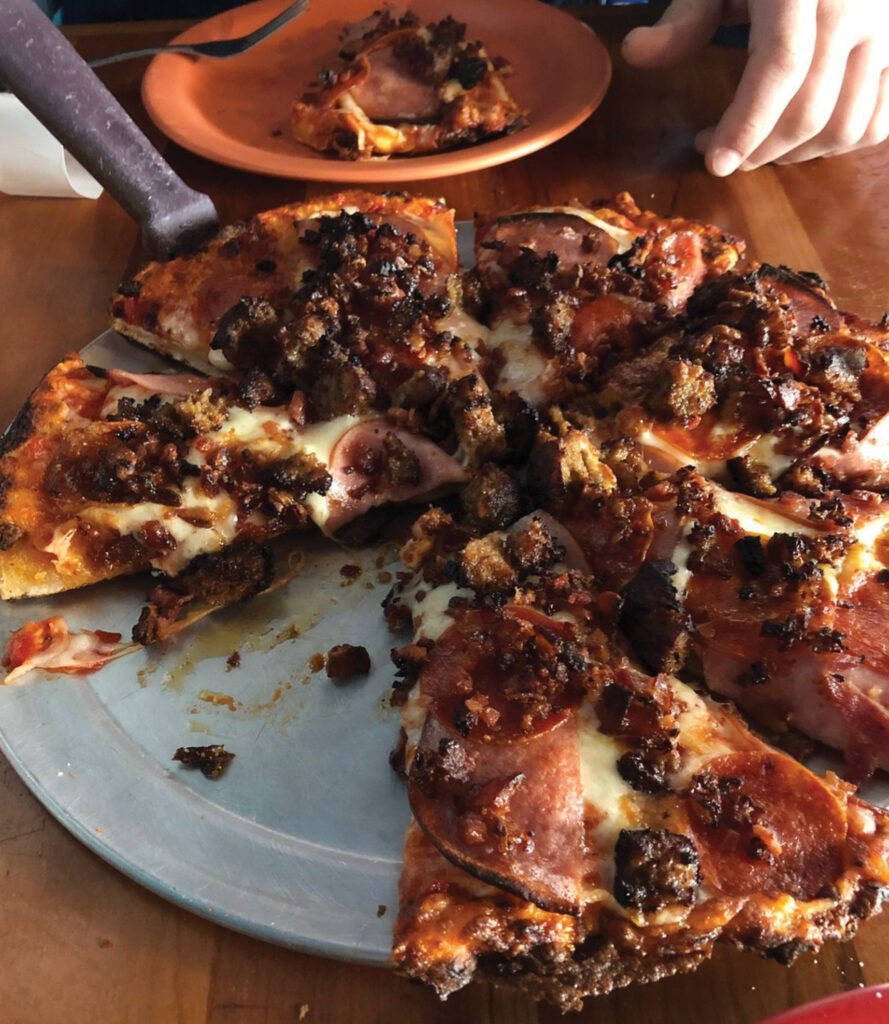 One of the many delicious pies offered by Powderhound. Courtesy photo.