One of the things I love about animation is its heightened sense of reality. A medium of storytelling filtered through pure imagination, animation done right makes fantasy more fantastic, emotion more poignant and humanity more human. 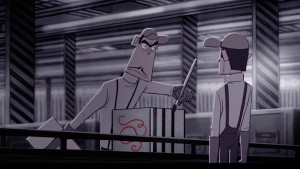 That sense is evident in every frame of the “17th Annual Animation Show of Shows,” a curated collection of the year’s best work in animation shorts. Featuring submissions from all across the globe, the “Animation Show of Shows” demonstrates that people really do have more commonalities than differences.

For “Animation Show of Shows” curator and Acme Filmworks founder Ron Diamond, the short film collection is an attempt to address a lack of showcases for animators. Since animation shorts aren’t hot commodities for distributors, there isn’t a major economic incentive to get them into public theater screenings. By contrast, the “Animation Show of Shows” travels from theater to theater, landing May 12-14 in Sandpoint for screenings at the Panida Theater. The showings takes place Thursday, May 12, at 7:30 p.m.; Friday, May 13, at 7 p.m. and Saturday, May 14, at 3 p.m. The collection is family-friendly and appropriate for all ages.

Over the course of nearly two decades, the “Animation Show of Shows” has become an annual staple for animators and animation lovers alike. According to Diamond, the final collection of films is confirmed in September just before Oscar buzz is beginning to build. It’s an important factor for him, since his aim is to craft a tonally coherent collection rather than ride the award-bait season.

“It’s a chance to really focus on films that will complement each other,” he said. “We want to weave together an entertaining program and leave the audience feeling enriched as they leave the theater.” 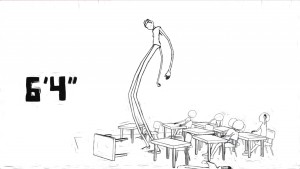 A still frame from “Love in the Time of March Madness.” Courtesy photo.

Since the shows typically include the best shorts that animation has to offer, however, it’s no surprise that there’s often crossover with eventual Oscar nominations. This year is no exception, as the collection caps off with Don Herzfeldt’s bitingly funny, Oscar-nominated “World of Tomorrow.” The short is set around a encounter between 4-year-old Emily Prime and her time-traveling, third-generation clone. Like many other Herzfeldt shorts, the film is both hilarious and sobering, a meditation on technological isolation buoyed by the spontaneous dialogue provided by Herzfeldt’s 4-year-old niece.

The other films in the collection demonstrate a similar energetic creativity despite differing moods and themes. “Love in the Time of March Madness,” a personal essay by co-director Melissa Johnson on her experiences as a nearly six-and-a-half-foot woman, won many San Diego Comic-Con fans who understood the awkwardness of their own unusual appearance or behavior.

“It’s not about being more than six feet tall,” said Diamond. “It’s about being different.”

Each of the “Animation Show of Show’s” 11 shorts is a labor of love, and they warrant the experience of a proper big-screen viewing. Do yourself a favor and drop by one of the Panida Theater showings next week. You’ll be amazed at what a gifted artist can accomplish within a few short minutes.