Training a bicycle army to take over Sandpoint

Have you seen the new “Mad Max?”

Yes? No? If you have and you want to experience a little bit of what that world is like, get your bicycle tires and adrenaline pumped up and join the next Full Moon Bike Ride. 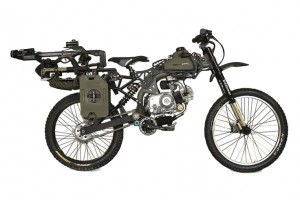 Yes. This monthly bike ride that starts at Eichardt’s on the night of the full moon, is basically a spin off of the movie “Mad Max.”

Need some proof? Picture about 200 people on bicycles chasing after a designated leader in the dark of the night. Where is this leader going? Who knows? The point is that they are the leader and everyone must follow them into whatever war situation lies ahead. Stop lights? Who cares? Bike paths? Not necessary. Residential areas? People shouldn’t sleep during a full moon. The mob of bicyclists wearing strange clothes with a myriad of lights on their bikes do not care about the traffic laws, residential peace or safety. They obey the laws of the full moon.

In the movie, the mob on wheels follows a skeleton-faced leader who feeds them breast milk and promises them a life in “chrome Valhalla.” On the Full Moon Bike Ride, the cyclists are fed a combination of dark beer, American spirits and a substance I can only identify by smell but I am pretty sure is patchouli oil. The lawlessness, dark beer and full moon make for a pretty exciting ride, even if it’s at times only around a mile long and has really no beginning or end.

This is eerily similar to the movie, as I have watched it twice, and I am not sure if there is a plot or a point to it. I suppose the purpose of the ride, and the movie, is that people are compelled by non-stop action that occurs on wheels. Pair that with a secondary message about unknowingly being trained by a leader for a war you didn’t see coming, and it becomes twice as entertaining.

Back to the bike ride, some cyclists are not as hardcore as others. These types don’t carry patch kits for their tires. Sadly, the unprepared apparently depend on the generosity of other hoard members to fix such situations. However, speaking from experience, it seems no one ever has a spare patch kit. And hell-bound riders rarely  stop to help a fallen soldier. Again, you must see “Mad Max” for reference. If you can’t ride, you are worthless as a soldier. They have other gangs to conquer and territory to claim; no one is going to stop and fix your war machine. That’s just the way lawless gangs work. So if you plan riding, you are going to have to be prepared and possibly have a specialized war machine.

I have partaken in this ride a couple of times, and I am going to give you an exercise that will help you prepare for your first ride: First, build a small obstacle course. You will need to have a small parking lot’s worth of space, make sure there are a few pot holes in it and then throw some gravel around. Park a few vehicles on the edge of your course. Next, have no less than 10 like-minded humans drink a few beers and ride their bikes around the course at the same time. Out of every five bicyclists, make sure one has a legitimate light on their bike; the others should just tape glow sticks to their handle bars.  Next, borrow a couple of kids, have them get on bicycles and infuriatingly ride back and forth in front of you. Make sure one of your friends knows to stop about every 30 feet or so for no apparent reason whatsoever. Get yourself a very dark beer, drink it quickly, then have another. Then get on your bike and see how you do making it through the course.

Ladies, do not worry. You will not have to train as hard as your male counterparts. As a woman you are uniquely qualified for this type of experience, as you have been dealing with a monthly bout of post-apocalyptic rage since the onset of puberty.

If you have survived this exercise—perhaps only wrecking your bike once by hitting a mailbox to avoid steamrolling a small child—you are ready to ride.

I know what you are thinking. Kids? Really? Yes, people do bring their children to an event that starts at 8 or 9 p.m. at a bar and involves human-propelled machinery and poorly lit situations. I can only speculate these children are being trained to someday lead the army. Warlords, even those on bicycles, typically start training future warriors at a young age. The kids on the movie couldn’t have been older than 6 or 7.

Another important similarity is that in the movie, there is a guy strapped to the front of a giant war vehicle. He plays an electric guitar that doubles as a flame thrower. When the gang is in hot pursuit of whatever it is that they are going to destroy or pillage, he plays death metal to inspire the troops. The Full Moon Bike Ride has a similar set up. One of the cyclists puts huge speakers in a baby cart and pulls it behind their bike. This speaker system usually plays some strange brand of techno, and I can only imagine the subliminal message is something like, “Pedal, pedal, pedal, faster, pedal, now slower, stop, pedal.” At least, that’s what seems to be going through my head when on this frenzied pursuit. Sadly, there are no flames or evil babies coming forth from the cart, even when it stops. But there is always next time, right?

Basically, going on the Full Moon Bike Ride is awesome. Dabbling in a bit of chaos once a month is perfect, especially if you aren’t fully ready to commit to the outlaw lifestyle. Also, it seems like just the right amount of time for the proper healing of road rash. Coincidence?

Whatever the case may be, if you are interested, you should give it a chance. I would suspect that soon, it will become less attractive, as I have heard talk of things like guidelines and rules being “needed.”

In closing, I would like to address the anonymous leaders of the full moon bike ride.

Hello, if you are reading this. Do you read the Reader or have one of your small child minions read it to you? Either way, could I bother you with a suggestion? It’s about the dress-up themes for each ride. Last moon was “back to school.” Can we just cut to the chase and have the theme for the next moon be “Mad Max?” Let’s just own it. The bike ride may have a secret ending, but you and I both know that the ultimate goal is training a bicyclist hoard to one day take over Sandpoint. I’m with you.

Continuing to train hard through all of the lunar phases,