Fire crews working the two major fires in the Bonner County area are steadily achieving containment, though a new blaze reported Sept. 16 is now burning about nine miles west of Coolin just over the Washington-Idaho border.

According to fire officials, the Bernard fire burning on 1,425 acres southeast of Bayview, is now 65% contained as crews number 161 personnel have successfully checked its perimeter. Going forward, firefighters are monitoring and reinforcing their lines, using equipment — including a helicopter — to conduct fuels removal and bucket drops from nearby Echo Bay. 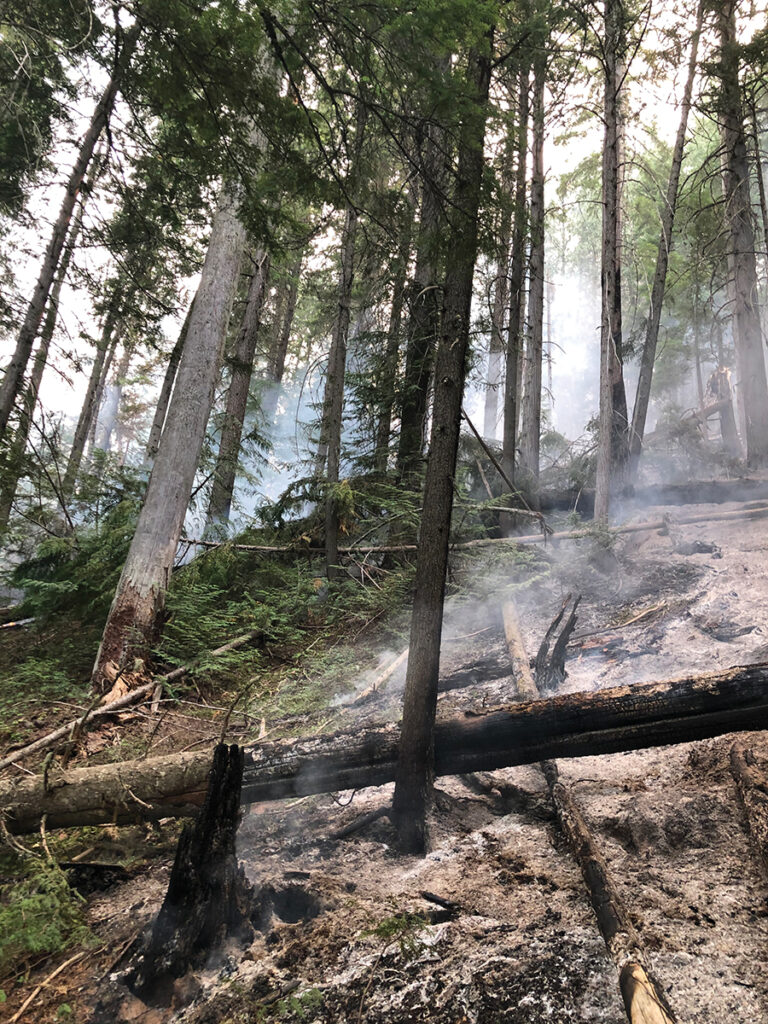 Winds have mellowed since the Bernard fire flared up dramatically in the second week of the month, resulting in fire behavior that officials described as “creeping and smoldering with occasional torching of trees.”

The Callahan fire, nine miles west of Troy, Mont. on the Idaho side of the border south of Smith Mountain, is burning on 1,276 acres of steep timber and brush, though crews reported Sept. 23 that the blaze is 41% contained.

A total of 289 personnel — including five crews, seven engines, two water tenders, four heavy equipment and three helicopters — are working directly on the edge of the fire, whose activity has remained “minimal” amid cooling, wetter weather.

Officials reported Sept. 23 that firefighters are continuing to mop up into the fire’s interior along Forest Service Road 4541, searching for and extinguishing hot spots. Meanwhile, they will monitor and patrol the line south of Smith Mountain.

The West Branch fire, first reported Sept. 16, is burning on 75 acres with 27 personnel at the site near Forest Service Rd 1094, and a half mile west of the state line.

As of Sept. 23, a helicopter, 20-person crew, engine and initial attack module are assigned to the fire, which is burning in terrain primarily composed of cedar and hemlock with heavy and downed fuel, including snags and hazard trees.

“Falling snags and burned trees are contributing to spread by falling and sliding down the hill,” fire managers reported.

Effective Sept. 17, Idaho Panhandle National Forests officials put in place a temporary road closure to protect public and firefighter safety during suppression work. Forest Development Road FS 1094, beginning at its junction with NFSR 312 and continuing to its junction with NFSR 1108, is closed until further notice.

All three fires will be affected by the wet weather system rolling through the Idaho Panhandle beginning Sept. 23, which brings with it the expectation of widespread rain. Forecasters are expecting Thursday, Sept. 24 and Friday, Sept. 25 to be cool, breezy and showery — though with a slight chance of thunderstorms.