When it comes to musical street cred, Perla Batalla has got it covered. Not only did she cut her teeth as a backup singer for the prolific and legendary poet, singer and songwriter Leonard Cohen, but her solo career has taken her around the world and back, sharing a wide variety of genres with appreciative audiences.

To listen to Batalla sing is to take a personally guided trip through her life of amazing influences. The transcendant quality of her voice can soothe even the most savage of souls.

I had a conversation with her upcoming show “Perla Batalla’s House of Cohen” at the Panida Theater on Thursday, Oct. 20, as part of the Pend Oreille Arts Council Performance Series. We talked about her time with Cohen, her early roots with music and, oddly, how she actually knows my grandfather from a small town in Southern California. 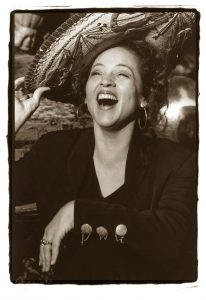 SPR: So you’re playing at the Panida. How did you get hooked up with that gig?

Perla Batalla: I actually sang at a conference last year called Folk Alliance and I met someone who is part of the POAC board—Steve Garvin. Coincidentally, he comes to Ojai, which is where I live, this tiny town in California.

SPR: I know Ojai. We used to go there every summer when I was a kid. My grandpa lived there for years.

PB: You’re kidding me. I know Leon. Oh my god, you have to mention to him that I am Heather Benton’s best friend. Heather just loves him. She just mentioned Leon like last week when we were having coffee. Isn’t that an insanely small world?

SPR: Wow. That is so amazing that you know my grandpa! Well, back to the interview…

PB: (laughs) Yeah, I’m really excited about coming to Sandpoint. I’ve been doing this “House of Cohen” concert, which is the music of Leonard Cohen, and that’s what we’ll be doing at the Panida. … Also, I had a friend of mine in Spain translate some of Leonard’s songs into Spanish, so I’ll be doing some of those.

SPR: I bet a song takes on a whole different dynamic when translated into Spanish like that.

PB: It really does. What’s interesting about Leonard is that his work is already so deep. He reaches very deep with his lyrical poetry. When translated to Spanish, it just goes further, which you didn’t think was possible.

SPR: You spent a lot of years with Cohen. Was he a muse for you, and did he help propel you off on your solo career?

PB: Absolutely. He was not only a mentor and a friend, but a very great inspiration for me. Being as I was young when I worked with Leonard—I was in my 20s—I watched him like I was watching a master and learning as much as I possibly could. His ability to perform and always seek the comfort of his audience, and to make people laugh and his ability to tell a story—to me that was the most fascinating thing. I heard those stories night after night and it was always like the first time. That’s the sign of a great storyteller.

I have so much affection and respect for him and his work that I feel like I have to care for these songs.

SPR: What type of arrangement can we expect at your upcoming show?

SPR: What are you working on for the near future?

PB: I’m actually wanting to do a Volume Two of Leonard Cohen’s songs because there are so many. Also, I’ve written a musical based on Frida Kahlo’s journal that is finished, but we’re still in development. I’m singing all the songs myself.

SPR: I read recently that you have been immersed in music literally since you were born. Tell me about that.

PB: Yeah, my father was a singer. Spanish was my first language. My father’s music in the early days was a lot of Mariachi music and the romantic songs of Mexico and South America. And my mother was Argentine. It was a musical tradition in my family to sit around after dinner and sing the songs of Mexico with my uncles and my dad. I took it for granted—I thought everyone’s life was like that. … My parents also ran a Spanish language record store, so I was surrounded by music all the time. These songs are very deep to me. They’re my tradition, my legacy. They’ve been handed down to me from my dad and my ancestors so I have a deep connection with these songs.

Catch “Perla Batalla’s House of Cohen” at the Panida Theater on Thursday, Oct. 20, at 7:30 p.m. Tickets are available at the box office, at POAC’s First Avenue office, or on Panida.org.