A Walk in the Park

Being single has its downsides.

I want to take a trip but have only camped solo once before. However, there is simply no way I will not be camping, so I chucked my gear in the Montero and set off east, ignoring the many stressing recommendations to carry a gun. 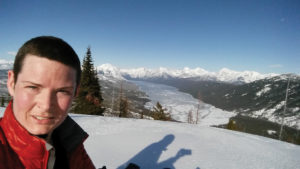 After a stop in Whitefish, I decide it is wrongly compared to Sandpoint what with its 12 blocks of thriving tourist shops versus our more authentic, raw-edged town with empty store fronts.

I want to pay the $25 entry fee to Glacier National Park, but there is no one at the booth, and the only other way to pay is with a QR code. I’m a bit of a technophobe, so I drive on feeling very cheeky indeed.

Campgrounds are closed in winter, but you can stay overnight at the Apgar picnic area right on Lake McDonald for free. Men are ice fishing, and some vagabonds have parked their rusty van for the night. I shovel a minimal footprint in the snow and use all my blankets for insulation before starting a fire. The sunset is spectacular, painting the Rockies from white to pink to green to gray. Fire attracts bohemians, and I’m soon joined by interesting vagrants, talking into the night. Snow camping bring several significant benefits for Glacier:

The only drawback of this campsite is that the sun doesn’t hit it until 11 a.m. Soon thereafter I set out for the Apgar lookout trailhead, a hike described as, “Roughly three-quarters of a mile from the parking area the trail begins a steady climb up the southwestern slopes of the mountain. Over the next 2.7 miles hikers will climb roughly 1,700 feet to reach the ridge just below the lookout.” Sounds easy, which is why I allowed myself to set out late. 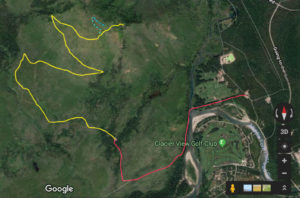 A quarter mile in I strip off three layers to my long underwear because it’s 50 degrees. I meet a couple who turned back because of avalanche danger (sun-exposed on a hot day, little vegetation, no fresh tracks, avalanche lines showing in area). I self-consciously try to ignore my exposed, furry legs. She says: “That was our call and yours can be different.” Another couple stopped short due to that advice, and a younger couple turned back at the halfway point because they had to get wasted at a St. Patrick’s Day party wearing funny green hats, no doubt.

3 p.m. — All alone on the trail now, just done following the fresh tracks of the young couple to the second switchback. Can’t be bad if they did it. The snow is slushy and unpredictable. There is less than a mile left. The slopes are steeper now, and large treeless areas are exposed to full sun. I don’t know much about avalanches beyond what I was just told and that they can kill you. My gut tells me this might be one of those moments I should consider turning around, but I often get unnecessarily anxious alone in the wild and want to push through the angst. What would Jim Mellen do?

There are vague tracks of someone that pushed on maybe yesterday, or it could be last week. Very gently I follow these, imagining a young handsome person telling me encouragingly, “You’re doing great, just put your foot right here.” When the snow breaks and I slide a few feet, I stop to calm down. Here is a spot where a stream might run in the summer and today big rollers have come down across the trail. Walk like an elf. I suddenly realize my imagined guide may have been an unwitting tourist like myself, completely oblivious to the very real danger and that they and we are both lucky if we make it out alive.

4 p.m. — I’m getting close, and the ridge is flattening out to my left. The tracks are nearly invisible here, covered in melting snow, but I see them ahead right under a large steep slope. Yeah, I’m not doing that. I remember reading something about the ridge being the safest route in snow, so I hook a left to find a clear break line I just cleared. Danger is now officially not imagined and can no longer be ignored.

It is a treat to break a snowy ridge, seemingly alone to find the world stretching on forever in all directions. Soon I’m waist-deep in a hole. I take off my pack, put on tails, cross my poles and get out in 10 minutes. Time is getting short now – less than two hours to sundown. Where in the world is this darn lookout? I find it two humps over to my right and walk closer. Don’t feel like going down and up all that landscape, so I settle with the peak I’m on which is higher anyway.

6:30 p.m. — You know that moment when you consider taking off your snowshoes because the ground feels pretty solid? Don’t, just don’t. But once you have tied them to your pack, you’re not going to stop and put them on again, even if you’re sinking into snow every 20 steps again.

6:45 p.m. — It is now officially dark, but the moon offers enough light not to get my headlamp out.

7:15 p.m. — Take off soaked shoes and socks (note to self: must buy gaiters) and climb into warm car. I call my best friend Sandy Compton, who thoughtfully sent me a track analysis while slowly driving back to camp. A coyote jumps out of the woods and runs in my headlights for a while. He stops, looks back and I see his red reflecting eyes.

8:30 p.m. — Change clothes in the warm car, put some food into a bag and crawl into my sleeping bag. There is a Dutch saying, “After a hard day of labor, it feels good to rest”.

9 p.m. — Some animals make a trademark sound you’re likely to recognize even when you’re hearing it for the first time. Two years ago, I knew instinctively when I heard a rattlesnake and now, I jolt upright, pull my hat off my ears and stop breathing. AwawOOoooooohhhhhh…. Wolf!

I look down to a spread of cheese, chocolate, chips and elk sausage all around me. Don’t know much about wolves, but they say bears will plunder tents for food, and I’m pretty sure wolves like meat. Speaking of bears, the bear spray is in the car. Somewhat panicked, I stuff my face with a finale of well-deserved treats before jamming what’s left in a bear canister, open the tent and hurl it as far away as I can. The howling continues.

4:21 a.m. — A sharp, hollow sound which can only be described as “running” across the lake wakes me. ZakOOwww …WipAowww … It must be the ice sheets pushing each other as the temperatures reach their low, and there’s not enough space for the expansion.

9 a.m. — I pack up and head out to East Glacier with the hope of camping at St. Mary campground. In my opinion, road trips require you to stop at every other pullout, so I don’t get to East Glacier until 11:30.

This is the Blackfoot reservation, and I have not interacted much with Native Americans so am unsure what to expect. The man at the gas station is 6 feet 5 inches and must weigh 400 pounds. He tells me in a friendly way the only diner in town is the 2 Medicine Grill, three blocks that way. I drive back past without seeing it, park, walk past the three blocks of rickety storefronts, don’t see it. I walk up a block across mud and ice to see a young Native woman walking my way in a similar sort of Super Mario fashion, hopping from ice sheet to ice sheet, surrounded by five large dogs. She points me back at where my car is parked for the diner, and I look even closer at the signs and in the windows. Nothing. She calls me back after following me to make sure I found my way: “It’s right here!” She holds the door for me where I finally see a tiny piece of bleached paper saying “2 Medicine Grill” in the window.

12 p.m. — I order the special (ham and cheese grilled rye sandwich with chips and a cup of beef-vegetable soup: $9) and take my maps out. Soon, the couple on the next table open a conversation and tell me many of the roads I was planning to take are closed in winter. Gratefully sipping my first coffee of the day, I reconsider my itinerary. I’m sunburned and tired and don’t feel like driving major highways, so I decide to turn back but take a long drive around north of Whitefish because I’ve never seen Eureka (not much to see, it turns out) and back along the Koocanusa reservoir. It’s a gorgeous day for a drive through the country, and I am rewarded with the surprise of finding Montana’s longest and tallest bridge named in 1972 as the world’s most beautiful long-span bridge.

After deciding the Netherlands did not offer serious adventure opportunities, Marjolein moved to Sandpoint in 2014 after roaming the planet for some years. She works for the international magazine MultiLingual. She keeps an irregular blog at marjoleingoestoamerica.wordpress.com.