How one pup came back from the dead

The story of Lazaruff, a rescued pooch that traveled across the country to get here

Lazaruff/Relic was supposed to be dead. That’s what the workers who found him in an abandoned house thought — that he had died of thirst and starvation. When animal control came to pick up the body and found out he was still alive, they rushed him to the vet.

Once there, they gave his emaciated little body — he weighed 19 pounds — fluids, and discussed his poor outlook for survival. Reluctantly they decided euthanasia would be the most humane course. Then he wagged his tail. 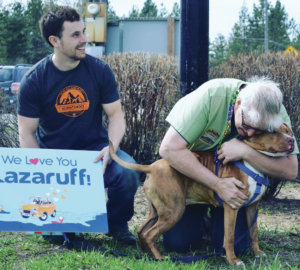 My wife, Teresa, and I met Lazaruff after he was a robust 27 pounds (he now weighs 66, to give you an idea of how bad it was) while we were volunteering at a clinic for homeless pets and the pets of low-income people in St. Landry Parish, La. Although we’d vowed not to adopt that day, we took one look at this tail-wagging skeleton covered in skin and broke that vow so fast it caused a sonic boom.

They’d called him “Relic,” but in recognition that he’d come back from the dead we named him Lazaruff. We planned to bring him into our family, but he had a long road ahead of him first. He had heartworm, but he needed to get up to a better weight and in better condition before starting treatment. We willingly paid for everything he needed, from heartworm treatment to consultation with nutritionists and behaviorists to working with a trainer to teach him about things like leashes.

What we all learned is that this boy has a huge heart and loves people with complete devotion. He is happiest on his back, head in your lap, getting his tummy rubbed, and going for long sniff-fest walks.

While we had intended all along to bring him into our family, as Laz continued his amazing recovery, his team realized that he was probably not going to be happy with us for a number of reasons. They felt he’d do best as an only pet in a quiet home where he’d get a lot of attention. We have a huge menagerie, live on a ranch and travel all the time. Despite the disappointment, we hadn’t come this far to turn back now. We reached out to Panhandle Animal Shelter, where we adopted our little dog QT Pi Becker. They set up a quiet foster home for him to stay while we work to find him the perfect home – maybe with YOU?

We wanted to fly Lazaruff to Idaho, but we found that no commercial airline would fly a dog they considered a pit bull. As a longtime pit bull family and a veterinarian who knows all dogs are individuals and opposes breed discrimination, it was a sobering reminder of what these dogs face. A friend of ours generously offered to fly to Baton Rouge and drive Laz to us in Idaho, but Teresa and I made the decision to drive him ourselves. We’ve gotten to know him really well on the trip, and we can promise you that whoever adopts this amazing boy will have unconditional love and joy in abundance!

If you’d like to take Lazaruff or any other animals home, contact the Panhandle Animal Shelter at (208) 265-PAWS.