A Reader interview with Festival at Sandpoint artist Bruce Hornsby

The legendary Bruce Hornsby will be kicking off 2016’s Festival at Sandpoint concert series on Thursday, Aug. 4. Recently the Reader was honored to have a short conversation via email with the Grammy-winning musician about his newly released album “Rehab Reunion,” his time playing with the Grateful Dead, the fickle pop charts and his deep roots in music. 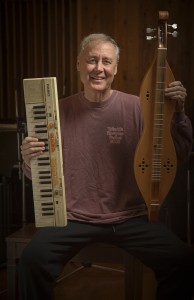 Ben Olson: Let’s talk about the new album, “Rehab Reunion” that just released June 17. You threw us a curve ball and decided to record an entire album not on the piano, but the dulcimer. Tell me about how this came about.

Bruce Hornsby: This album has been coming ever so gradually since about 1996 when I bought a dulcimer at the Galax Old-Time Fiddler’s Convention. The instrument started making small appearances on several of my records from ‘98 (Spirit Trail) on, and from 2009 on we have had a stripped-down dulcimer-based acoustic set in the middle of our concerts for the last seven years that has become increasingly popular. I started writing more songs on the instrument, we were playing them live to great response, and it became clear that this record needed to be made.

BO: Do you feel you write songs differently with the dulcimer than you have with the piano?

BH: I like that the limitations of the instrument (and the limitations of my mediocre playing ability on it) force me to write simple music—never a bad thing. “Rehab Reunion” is really NOT about virtuosity, it’s about songwriting and creating a certain style within the constraints of an old-time traditional instrument.

BO: You had a couple of guest appearances on the album that really added some flavor to the new album, including Bon Iver’s Justin Vernon and legendary gospel singer Mavis Staples. What was it like working with them?

BH: I asked Justin to sing on “Over The Rise” when I was in Eau Claire. I heard his great falsetto sound (that I knew from his records) in my head, and when he sent his track back to me it sounded just like I thought it would. That doesn’t happen very often.

Mavis and I just had a great time recording, a lot of laughs and joy in the room. What a beautiful spirit she has! I gave her very little direction; she really didn’t need it. She already knew the song, a least a little, and it seemed to be a very natural fit. I just had her sing it through a few times, not many, and I put the performance together later. I just wanted her to enjoy her time singing it.

BO: You spent a good portion of your career playing with the Grateful Dead. Any fun stories you’d like to share from those wild days?

BH: Mostly I remember the chills I used to get playing certain songs, “Wharf Rat”, for instance. I remember playing the accordion standing next to Garcia playing “Iko Iko” at Mile High Stadium in Denver, and just whooping and hollering as he just played his ass off over those two chords for many minutes. I could go on.

BO: After the commercial success of “The Way It Is” with the Range (which is still one of those songs that takes me right back to childhood, running through the sprinklers in my front lawn), you embarked on more of a solo career in the ‘90s that departed from the mainstream direction you were heading. The critics and fans alike applauded this move. Tell me about what it’s like to be on top of the charts and pack it in to explore new depths in your songwriting ability.

BH: The “charts” are never to be trusted. If one lives and dies by the fickle vicissitudes of the pop world, one will surely die sooner or later. I’m a lifelong student, always in search of new inspiration, improving my abilities and broadening my range of knowledge and influences. So those next records, and all the subsequent ones, have been about that pursuit.

BO: Your songs often tackle important themes such as civil rights, race and religion. How do you think we’re doing in the U.S. now as opposed to the mid-eighties when you launched your career? Better? Worse? Same same?

BH: Winston Churchill said it best: “The best case against democracy is a five-minute conversation with the average voter.” It’s a very cynical statement, but with a lot of truth to it. Education, being informed, and being open-minded, willing to see several sides of a problem are always preferable to actions based on an uninformed position. It takes work, but it will always help us move forward.

BO: You’re kicking off the Festival at Sandpoint this year, and a lot of people are really excited to see you perform live. Can you give a sneak peak at what we can expect from the show?

BH: Spontaneity in performance and a broad musical range. The Noisemakers band is made up of players who bring something to the musical party that has a lot of depth, a lot of gravitas in several different musical areas, whether it’s a great groove and feel, great improvisational melodic sense, an ability to come up with musical parts on the spot that meld with the rest of the band, someone who is sensitive to the interstices, the spaces between other parts, and a good listener, because we just wing it a lot, and the players need to be aware what’s happening in the moment and react quickly and well to that.

BO: Final thoughts: What advice do you have for a young musician just starting out in the music industry today?

BH: My time as a student in Miami was such a seminal time for me, so important to my development as a musician. I had a great, tough teacher, Vince Maggio, who I still consider to be my teacher. Playing gigs all over the area putting myself through school, jam sessions in the Foster Building virtually every day, on and on. I’m a lifelong student, always looking for new inspiration, and always looking to improve what I do and push it to new areas and new heights.

Catch Bruce Hornsby and the Noisemakers at the Festival at Sandpoint on Thursday, Aug. 4. For tickets. call 265-4554 or visit www.FestivalatSandpoint.com.