There seems to be some silly idea that a war is being waged on Christmas, that Classical ideas are under fire and are being forced into change by forces of greed, lust for power and unrestrained tyranny. If you strive to return to the pure roots of Christmas, you’d better be ready to tear down that Christmas tree and abstain from food for a month.

Christmas time in the Medieval world was, well, let’s be honest: It was weird. Catholicism was waging a war on paganism throughout Europe, an effort that met considerable resistance throughout Germania and Scandinavia. One of the most enduring traditions comes from Yule, which you may recognize immediately as a Yule log, which is confusingly a dessert as well as an actual log in a fireplace that you’ve been streaming on Netflix for the past two weeks. 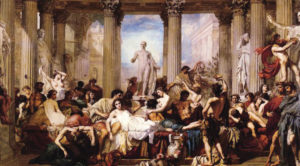 Yule was a winter solstice festival that had deep and confusing roots in Norse mythology, believed to celebrate Odin and the Wild Hunt, a group of spectral hunters streaking across the sky pursuing prey. Yule logs were tree stumps selected and burned in the hearth to give families good luck, which was needed during a time of year when it was too cold to grow crops and freezing to death was commonplace.

In addition to logs, Yule traditions persisting to this day include the Yule goat, which may have evolved into the symbolism of Christmas reindeer; the Yule boar, which is essentially a Christmas ham; and Yule singing, which has since become caroling.

A pagan tradition that may precede Yule — and offer the basis for why Christmas takes place when it does — is Saturnalia, an insane Roman holiday that took place around this time of year in worship of the Roman god, Saturn. Though cited as a time of merrymaking, it seemed more reflective of a brief window of time during which civilization fell apart and gave way to anarchy. Work halted for the weeklong holiday, the roles of slave and master were briefly inverted and in some cases sacrifices were made.

The tradition of gift giving actually traces back to Saturnalia and the role sacrifices once played in Roman life, as people would offer one another terracotta or wax figurines as gifts upon the conclusion of Saturnalia in lieu of killing someone’s goat.

In many medieval European countries, it was customary to fast during Advent, the 24 days leading up to Christmas from Dec. 1. This custom may have been equal parts pious and necessary, as food was already difficult to come by in the middle of winter, when refrigeration wasn’t even conceivable. Christmas, and the 12 days following, were usually marked with feasting — especially among the households of the land-owning gentry.

Gift giving has been a favored tradition throughout history, but could you imagine it being a requirement for everyone in your office to give your boss presents with zero reciprocation? Gift giving during the Middle Ages was, like most aspects of life, a very one-sided affair. The lower class gave one another simple gifts as they could afford it, but it was also expected for each household to present their lord with gifts as well, usually in the form of extra food. Land-owning nobles were perceived as the protectors of their subjects, but this practice likely was more akin to offering a mobster protection money than genuinely being thankful for their lord’s services. Today, it would be akin to your employer expecting you to return your paychecks in December, for having the privilege of working for them — a tradition I’m happy has gone the way of the Christmas Dodo.

Yule singing and Christmas caroling as we know it was a conflicted practice during the Middle Ages. The clergy viewed singing and dancing as sinful, heretical pagan rituals, even when the singing and dancing was intended to worship Christianity. Medieval Christmas carols were strange, complex tunes that sound totally alien to our modern ear, often incorporating different people singing different tunes simultaneously with one or two guys raging away on bagpipes to honor shepherds — another important job in medieval life.

As for Christmas trees, this is actually a fairly new tradition, beginning sometime in the 19th century. Most people in medieval Europe decorated their homes with evergreen branches and holly around Christmas time to celebrate the persistence of life in the season time of the year, but few were ever observed actually dragging trees into their homes. Medieval homes were cramped, functional spaces that were also extremely flammable. Adding an unnecessary obstacle like a tree indoors would have seemed like a foolhardy endeavor to most people in that age.

Such affairs were often left to the churches, which would decorate evergreen trees with apples, in reference to the fruit of knowledge eaten by Eve in the Garden of Eden. Given the scarcity of food in the middle of a medieval winter, I wouldn’t be surprised if a few followed Eve’s example and snagged a Christmas apple for themselves.

We live in an age of global communication, where everyone can interact with one another in real-time, learn about each other’s customs and history while sipping a very 21st-century peppermint mocha. Christmas has changed generationally throughout history, so its continual evolution is neither new nor unprecedented.

So enjoy your holiday season, turn off the news and your social media feed for a few hours, and enjoy your Yule boar with the people that matter most to you.