The beginning of time (and food)

As much as I like to consider myself  well versed in the gastronomic arts — dedicating a fair amount of time to answering food-related questions for family, friends and readers — I stumbled upon a story about a woman who puts my efforts to shame.

From 1997 until she passed away in 2015, Lynne Olver, a long-time librarian and foodie, compiled what is the most comprehensive timeline of food ever recorded. Her no-frills website, foodtimeline.org, chronicles food from the beginning of time through 2015.

I learned of Olver while indulging in one of my favorite quarantine pastimes: searching the internet for entertaining food and travel fodder. One of my favorite places to land is atlasobscura.com. Do yourself a favor: grab a coffee and settle in for some pretty esoteric reads.

According to Atlas Obscura, Olver passed away in 2015. Only 57 years old, she succumbed to a rare form of leukemia, leaving behind a husband, two children, several cats and the internet’s largest repository of food history. The entries begin with prehistoric essentials — ice, water and salt — and end with cronuts and test-tube burgers. In her 16-year passion-filled project, Olver spent up to 30 hours each week amassing and organizing a voluminous library of food reference materials.

Her family is now looking to pass Olver’s torch, which includes the website domain and more than 2,000 cookbooks, to someone who will carry on with her labor of love and legacy. Oldest daughter Ryanne and I have talked about utilizing our shared love of food and doing just that. That’s where our similarities end, though, and I imagine it wouldn’t be long before our dream turned into a nightmare. My shoot-from-the-hip style (and short attention span) are no match for her professorial, researcher intellect.

I often recall our different styles, like when I took both of my girls on a trip to France. While in Avignon, Ryanne was keen to take the comprehensive lecture tour of the Palace of the Popes. At the same time, Casey and I were quite content to circle the impressive plaza and find a delightful sidewalk café to savor the scenery, nibble on triple cream cheese and sip bubbly champagne while waiting for Ryanne to complete her three-hour tour. Finally, she joined Casey and me, and we were quite content with the abbreviated Cliff Notes version of her experience.

Passion is one thing, but the dedication and discipline that went into Olver’s website is remarkable. I was amazed to learn from Atlas Obscura that, over the time period that she operated her website, Olver answered more than 25,000 questions. She maintained a strict turnaround time of 48 hours to answer questions sent to her — even taking her desktop computer on family vacations so she could respond within her self-imposed time frame. Remarkably, even though she often responded with a royal “we” because she wanted to give the impression that there was a team of volunteers working with her, she alone ran her site, doing the research and answering all the questions posted to the site. She received no money from advertisers and never charged for her services.

Though there are broken links and some misspellings, I marvel at the resource that is foodtimeline.org. Through the 12,000-word entry on pasta, I have learned many theories on its origin and specifically the theories explaining the origin of one of my favorite spaghetti dishes (and the recipe recently featured in my column), pasta alla carbonara.

Ryanne would have gotten along well with librarian Olver, whose entry about ice cream alone runs more than 32,000 words. Ryanne is also a professional researcher and writer (she recently completed a 300-page manuscript that took three years of research), while I am often hard-pressed to write a 700- to 800-word biweekly column). Ryanne studies the sociology of food and its origins, and I can see her pounding out an entire article on the migration of pasta. I’m just grateful that spaghetti made its way here and my family agrees.

Ryanne and I might not get around to collaborating on any written works, but we do love to cook together and we love this tasty recipe for a cool summer salad. We hope your family likes it as well. 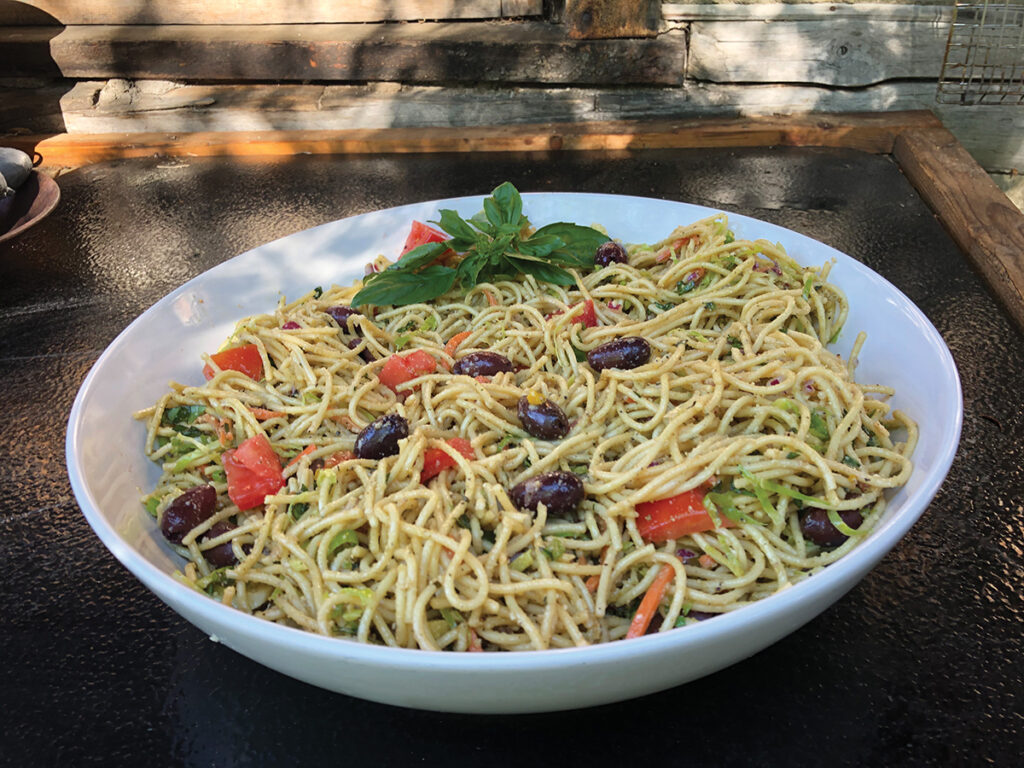 Make this at least 3-4 hours in advance. This recipe is a wonderful way to enjoy the bounty your garden is producing.

Cook spaghetti pasta according to package directions. Drain and rinse. In a large bowl add spaghetti, toss with olive oil, pesto and Parmesan, until spaghetti is well coated. Add all remaining ingredients and toss well.