Like most great ideas, the Community Assistance League began with two women trying to solve a problem. 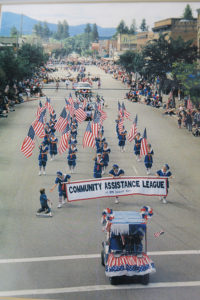 CAL marches in its first Sandpoint Fourth of July parade in 2001 wearing handmade old-fashioned bathing suits and dancing to “By the Sea, By the Sea.” The group won best entry of the parade. On the lefthand side of the photo, a member very appropriately provides assistance to a child. Photo courtesy of CAL.

As the legend goes, Sydne Van Horne and Marilyn Pagano were sitting on Van Horne’s beach in 1979 discussing local issues when they agreed that Sandpoint had few options for women to get involved. After Marilyn’s husband encouraged them to do something about it, the women, along with Ginny Jensen, created CAL as an effort to support local schools and nonprofit groups.

What began on a beach 40 years ago is now a group of about 250 members responsible for giving around $1.5 million to programs in Bonner County.

Still, CAL’s full impact on North Idaho is impossible to quantify. The organization — which has no paid director or staff — has had its hand in starting events like the Panhandle Special Needs Olympics, the Kaleidoscope Art Enrichment Program, Junior Miss and even the Festival at Sandpoint, which CAL produced for the first two years.

“We’ve started a lot of things that have gone on to be such a wonderful benefit to the community,” said CAL member Joyce Spiller.

If you consider CAL a well-oiled machine providing financial assistance to groups across the county, Bizarre Bazaar is the engine that keeps things running — more specifically, the store’s volunteers and the donations that come in from the community.

Bizarre Bazaar began as an annual rummage sale fundraiser for CAL. After the 2005 sale, when there were too many donations to sell and local charities didn’t have room for all the leftover items, Spiller proposed the idea of a thrift store to the president at the time, Tracy Gibson.

“(Gibson) wanted (a project) you could wrap your heart around,” recalled CAL member Cindy Chenault.

“So this was the perfect answer,” added Spiller.

Bizarre Bazaar opened in 2006 in Ponderay with Spiller and Chenault as the managers. They served through a move to Sandpoint in 2010 until 2016, when current managers Diane Arrants and Cheri Warber took over.

“Those were hard shoes to fill,” Arrants said.

The “upscale resale” store is now located at 502 Church Street in Sandpoint. People donate good-quality clothing and home goods and CAL volunteers then sort, price and stock the vibrant storefront with those donations.

Arrants said CAL volunteers are comprised of “an incredible variety of people from all walks of life.”

“The idea is to fulfill the mission and have a good time doing it,” Warber said, that mission being — officially — to support North Idaho “through education, service and philanthropy.”

Bizarre Bazaar accounts for the bulk of CAL’s fundraising, and 100% of the store’s proceeds go toward grants and scholarships.

CAL is always looking for more volunteers, as it takes three volunteers each shift, two shifts a day to staff Bizarre Bazaar, and many members volunteer only a couple times a month. Those interested in volunteering should pick up an application in the store.

Donations of clothing and other items are also always welcome, and can be dropped off on the side of the building facing the Granary District. Shopping at Bizarre Bazaar is also a great way to ensure CAL can continue giving financial support to local groups. The store is open Monday-Saturday 10 a.m. – 4 p.m.

“The community has been so supportive, from day one, of our store,” Spiller said. “We are so grateful.”

CAL is currently looking for a new location to house Bizarre Bazaar. The organization is seeking a space somewhere around 4,000-5,000 square feet for a “reasonable rent.” Anyone with a tip should call Bizarre Bazaar at 208-263-3400.

CAL will commemorate their 40th anniversary with a public celebration in September. More details on that event will be published in a future Reader.

“I consider it a privilege and an honor to be a member — that’s how I feel about being a CAL lady,” Warber said.

Arrants said being a part of such a widely respected organization is nothing short of rewarding.

“You come here, you volunteer, you do what’s necessary, you enjoy your time, and you don’t really realize … but when you go back to the legacy they’ve created for us, you understand why (CAL has had) that kind of impact,” she said.