Pickleball: the fast growing sport with a funny name

If you’ve never heard of pickleball, get ready, it’s coming. The sport has become one of the fastest-growing sports in the nation. With more than 13,000 indoor and outdoor courts in the U.S. and over 2.46 million participants, the fun activity with the even funnier name is here to stay. And no, it has nothing to do with pickles. 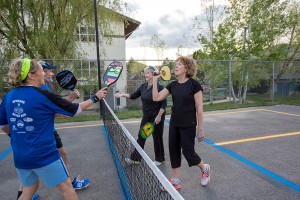 Ellen Westfall and Gary Noble (near side) battle against Bob Krummert and Mack MacKinnon (far side) at SWAC last week. Photo by Ben Olson.

For Don Helander, owner of Sandpoint West Athletic Club (SWAC), pickleball is a sport that appeals to all ages.

“There is a little less movement and impact than in tennis, so it appeals to the 50-plus crowd,” said Helander. “But honestly, anyone can play. You can take it as hard as you like.”

The sport is a hybrid between ping pong, tennis and badminton. You can play singles, triples (two on one) or doubles on a court that is roughly the same size as a doubles badminton court. Paddles are made of a lightweight composite material such as aluminum or graphite, and balls have holes in them to slow their flight.

There is a seven-foot zone referred to as the “kitchen” where players are not allowed to step. This no-volley zone helps keep the playing field fair, without players dominating the net.

With the courts much smaller than tennis, it’s possible to have the same level of intensity and volleys without the sprinting and high impact movement.

“I got hooked the first time I played,” said Mack MacKinnon from Sagle. “I grew up playing tennis and this is very similar. It’s really good exercise, but less impact than tennis.”

Helander recently converted a couple of basketball courts outside of SWAC to accommodate pickleball and has seen the interest from the community increase. While pickleball is available for SWAC members, it’s also open for non-members and first timers.

Non-members can play for $4 on the two available courts. Wednesday evenings are designated for free play after 5 p.m., so if you’d like to give it a shot without forking over the modest fee, this is your night. SWAC even provides demo paddles and balls.

“I really like to see stuff going on out here once our Adventure Camp is through for the day,” said Helander, as we sat watching the pickleballers going at it.

“It’s like you’re the tennis player of your youth, but scaled down,” said Bob Kummert of Hope. “Every time you have at least a two or three stroke ralley. There are magical recoveries. It’s really fun.”

The game certainly is fast-paced and fun, but it’s the social side of the game that appeals to quite a few players.

“It’s the friendliest sport I’ve ever seen,” said Ellen Westfall of Hope. “Nobody is screaming or yelling. It’s always a good time.”

Though it is enjoying a surge in popularity, especially throughout the southern states, pickleball was actually invented in 1965 on Bainbridge Island near Seattle. Joel Pritchard and his two friends Bill Bell and Barney McCallum returned from a golf game and tried to set up a badminton game but couldn’t find the shuttlecock. They improvised with a Wiffle ball and lowered the net, then fabricated the paddles out of plywood from a nearby shed. The result was pickleball.

Some sources say the name “pickleball” was named after the Pritchard family dog Pickles, but it was most likely named after the term “pickle boat,” which refers to the last boat to return with its catch. Pickle boats often contained oarsmen that were chosen from the leftovers of other boats.

Interested in trying pickleball? Head over to SWAC at 1905 Pine Street to enjoy open play. You can also call them at 263-6633 for more info. Remember, Wednesdays after 5 p.m. are free.

A City League takes place every Thursday evening. Contact Sandpoint Parks and Recreation at 263-3613 to sign up.

“I’d really like to see this sport grow,” said Helander. “I want to let people in Bonner County know that pickleball is here to stay.”